Berlin/Köln (April 22, 2016) – Energy consumption in Germany peaked at 13,306 petajoules (PJ), or 454.0 million tons of coal equivalent (Mtce), in 2015 and, thus, was about one percent above the previous year’s level. This increase is primarily due to the weather, which was slightly cooler than the much milder previous year, and the associated higher demand for heating energy explained the Arbeitsgemeinschaft Energiebilanzen (AG Energiebilanzen) – Working Group on Energy Balances (Energy Balances Group) when it presented its report on the development of energy consumption in Germany. According to calculations of the AG Energiebilanzen, the positive economic development as well as the growth in population also led to an increase in energy consumption which was, though, almost compensated by gains in energy efficiency. Without the contributory factor of the cooler weather conditions, energy consumption would have actually decreased by 0.4 %, announced the AG Energiebilanzen.
The AG Energiebilanzen assumes that CO₂ emissions will probably only increase slightly compared to last year due to the weather because the growth in consumption was primarily attributable to low-emission or emission-free energy carriers while the consumption of hard
coal and lignite declined.

In 2015, mineral oil consumption remained essentially unchanged at the same level as in the previous year and amounted to 4,511 PJ or 153.9 Mtce. While the consumption of diesel fuel increased significantly due to higher demand from the transportation and construction sectors, gasoline exhibited a slight decrease because of the declining number of vehicles with gasoline engines. Sales of aviation fuels were on par with last year. Sales of light fuel oil did not increase because consumers met their increased demand primarily from existing oil stocks.

Natural gas consumption increased by 5 percent to 2,812 PJ or 95.9 Mtce. The main reason were the cooler weather conditions during the first half of the year compared to the very mild previous year and the associated increased use of natural gas for heating purposes. The weather conditions during the fourth quarter were once again very mild which dampened the growth, though, considerably.

In 2015, the consumption of lignite stayed slightly below last year’s value and reached 1,567 PJ or 53.5 Mtce. About 90 percent of the production was used in power plants to generate electricity and heat. With about 155 terawatt hours (TWh), power generation from lignite stayed also at the same level as last year.

Nuclear energy decreased by about 6 percent which is attributable to the decommissioning of the Grafenrheinfeld nuclear power plant in mid 2015.

Renewable energies increased their contribution in sum total by about 10 percent to 1,669 PJ or 56.9 Mtce. While electricity production from biomass increased by around 2 percent, the contribution of hydropower (excluding pumped storage) dropped slightly. Onshore and offshore wind power exhibited an increase of more than 50 percent compared to the previous year.

In addition to precise data of the trends in consumption, the Annual Report of the AG Energiebilanzen also provides detailed information on the consumption after its adjustment to the temperature effect, energy efficiency, the share of imports, domestic production, price
trends as well as an initial estimate of the energy-related CO₂ emissions. The Annual Report is, thus, an important source of data and a basis for monitoring the Federal Government’s mandated Energy Turnaround.

Information for editorial departments: The complete report on the primary energy consumption trends in 2015 is now available for downloading at the following website: www.ag-energiebilanzen.de 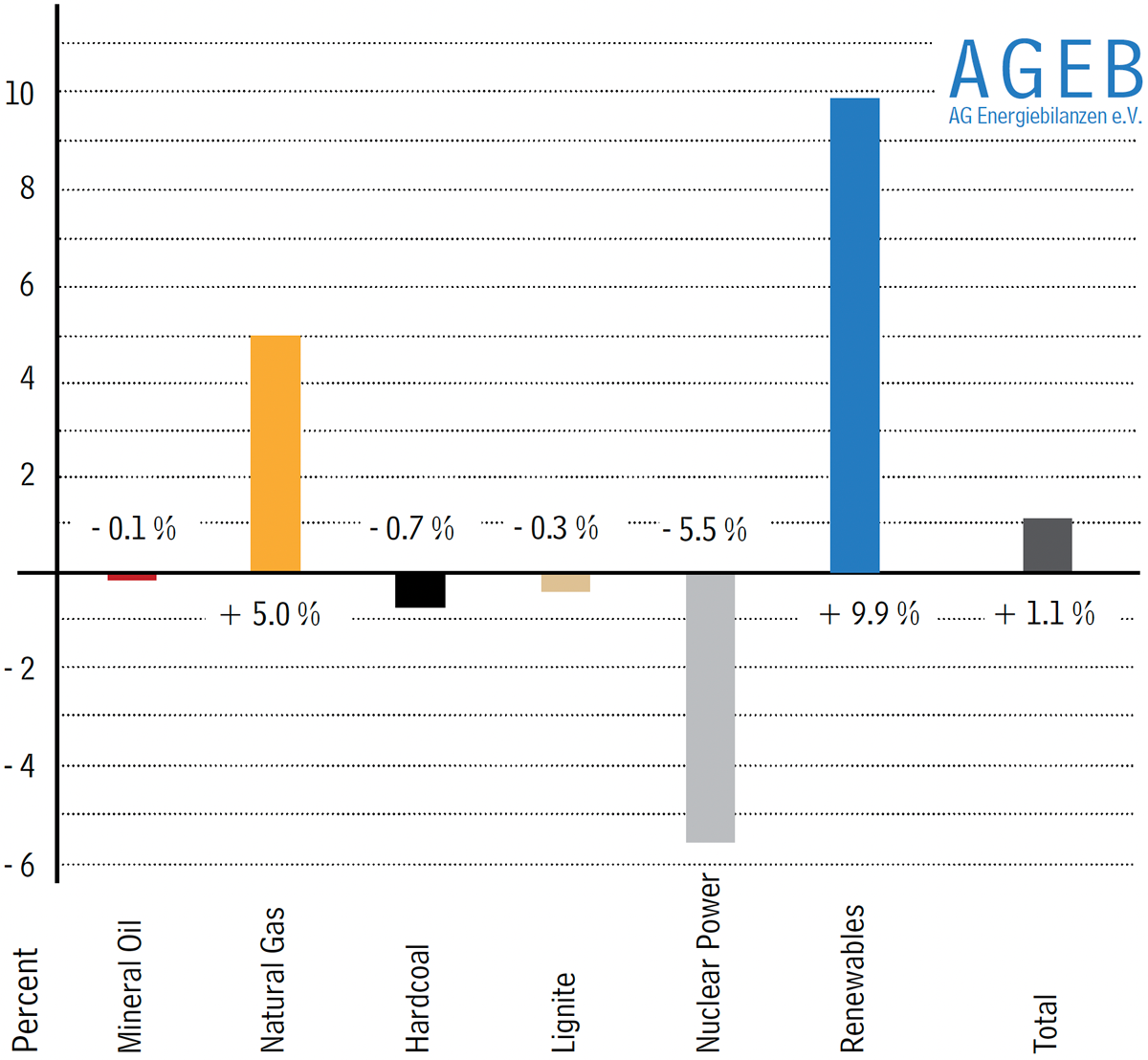 Berlin/Cologne – According to preliminary calculations made by the AG Energiebilanzen, energy consumption in Germany amounted to 13,306 petajoules (PJ) or 454 million tons of coal equivalent (Mtce) in 2015 which was 1.1 percent higher than previous year
Source: Arbeitsgemeinschaft Energiebilanzen

Proportion of Energy Sources of the Primary Energy Consumption 2015 in Germany – Total Volume 13,306 PJ or 454 Mtce
Proportion in Percent (Previous-Year in Parentheses) 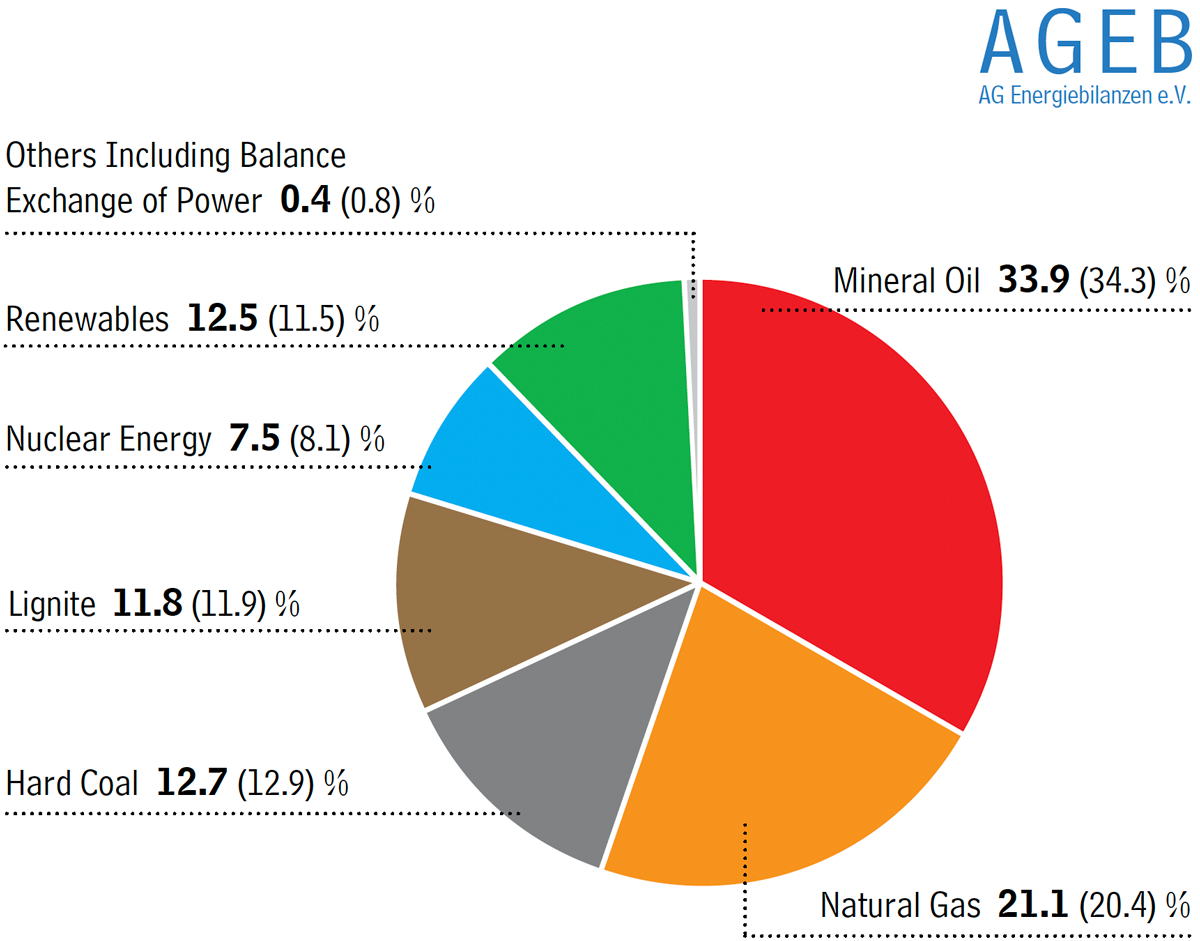 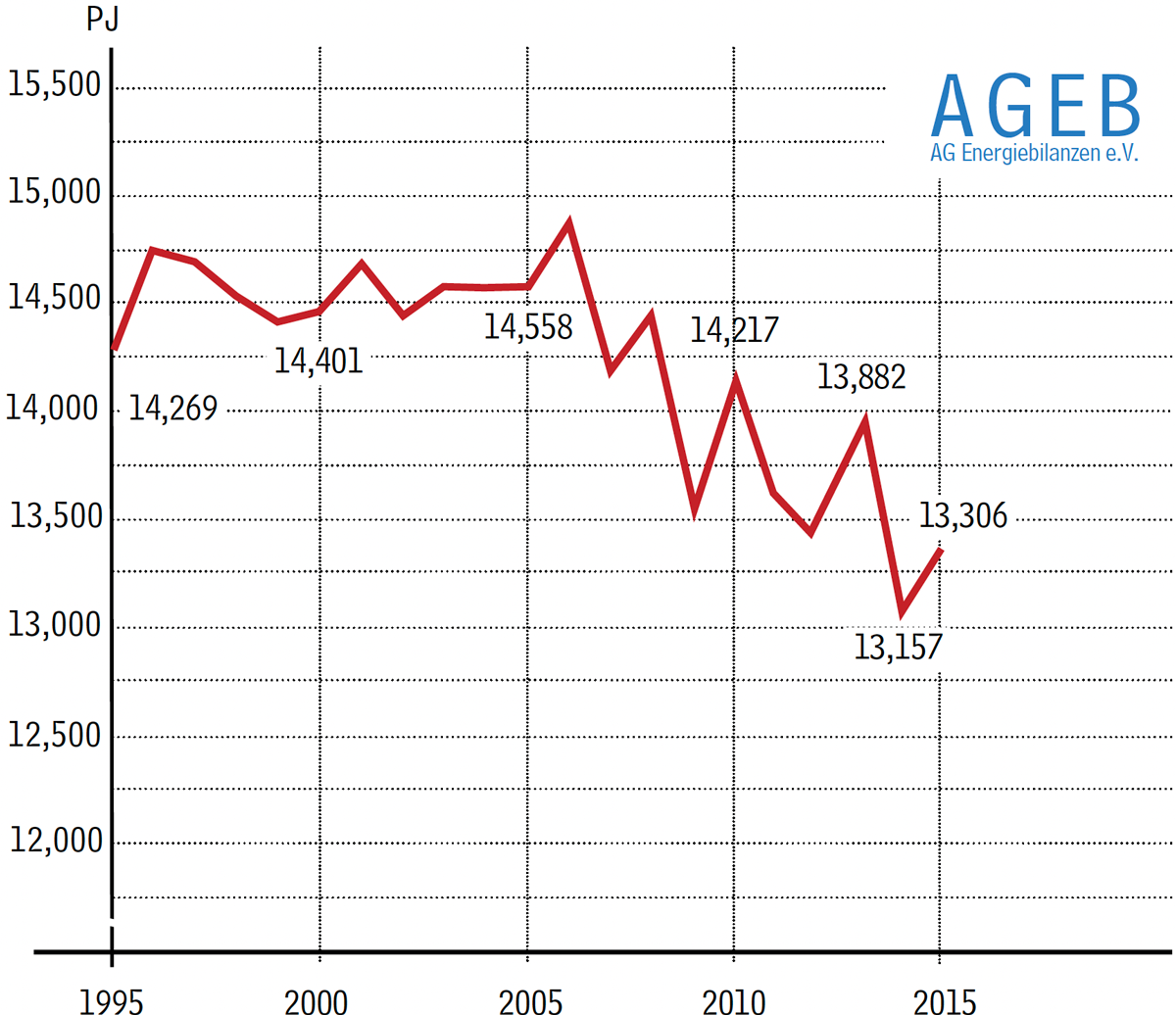 Berlin/Cologne – Energy consumption in Germany increased moderately in 2015. The slightly cooler weather had the greatest impact on this increase. When compared to previous years, overall consumption was at a low level.