Berlin/Bergheim (December 18, 2019) – According to preliminary calculations conducted by the Arbeitsgemeinschaft Energiebilanzen (AG Energiebilanzen) – Working Group on Energy Balances (Energy Balances Group), Germany’s energy consumption peaked at 12,815 petajoules (PJ), or 437.3 million tons of coal equivalent (Mtce), in 2019. This translates into a decline of 2.3 percent when compared to the previous year.

The total consumption of mineral oil in 2019 was 1.7 percent higher than the previous year. Sales of diesel fuel and gasoline as well as aviation fuel exhibited a slight increase. Light fuel oil recorded a significant increase in sales of 17.4 percent. Due to the economic situation, supplies of naphtha for the chemical industry decreased by about 8 percent.

Germany’s natural gas consumption went up by 3.6 percent. In addition to the higher demand for heating in the cooler months of spring, this upturn was, above all, due to the increased use of natural gas in power plants.

Consumption of hard coal decreased by a total of 20.5 percent and reached a historic low point. Both the generation of power and heat experienced declines of more than a third which was due to the fact that more power was generated from renewables and natural gas. The steel industry reduced its hard coal use by almost 4 percent. For the first time in quite a long time, the steel industry was the most important sales sector for this energy carrier.

Lignite consumption went down by 20.7 percent in 2019. Due to the transfer of additional power plant units into their standby mode for backup purposes, reduced extraction volumes in the open-pit mine Hambach, a larger number of power plant revisions when compared to the previous year as well as increased power generation from renewables, supplies to lignite-fired power plants experienced a significant downswing. Consumption of lignite, thus, decreased for the seventh year in a row.

Compared to the previous year, nuclear energy exhibited a slight reduction in power generation amounting to about 1 percent. By the end of the year, another nuclear power plant (Philippsburg) will go offline as scheduled.

Renewables enhanced their contribution to the total energy consumption by 4 percent in 2019. Wind energy increased its share by 15 percent. Hydro power grew by 4 percent. Solar energy went up only slightly by 1 percent. Biomass, which accounted for more than 50 percent of the entire volume in the renewables sector, recorded a plus of 2 percent.

Compared to the previous year, the contributions of the diverse energy sources to the national energy mix have shifted further in 2019: Fossil energy experienced an overall decline so that the energy supply in Germany was able to reduce its carbon intensity even further. A characteristic feature, however, continues to be the broad energy mix. Oil and gas accounted for more than 60 percent of the domestic energy consumption. Hard coal and lignite collectively encompassed approximately 18 percent of the consumption. Renewables increased their share to nearly 15 percent.

Substantial Drop in Energy Consumption in 2019

Development of Primary Energy Consumption in Germany in 2019
Estimated Changes in Percent – Total 12,815 PJ or 437.3 Mtce 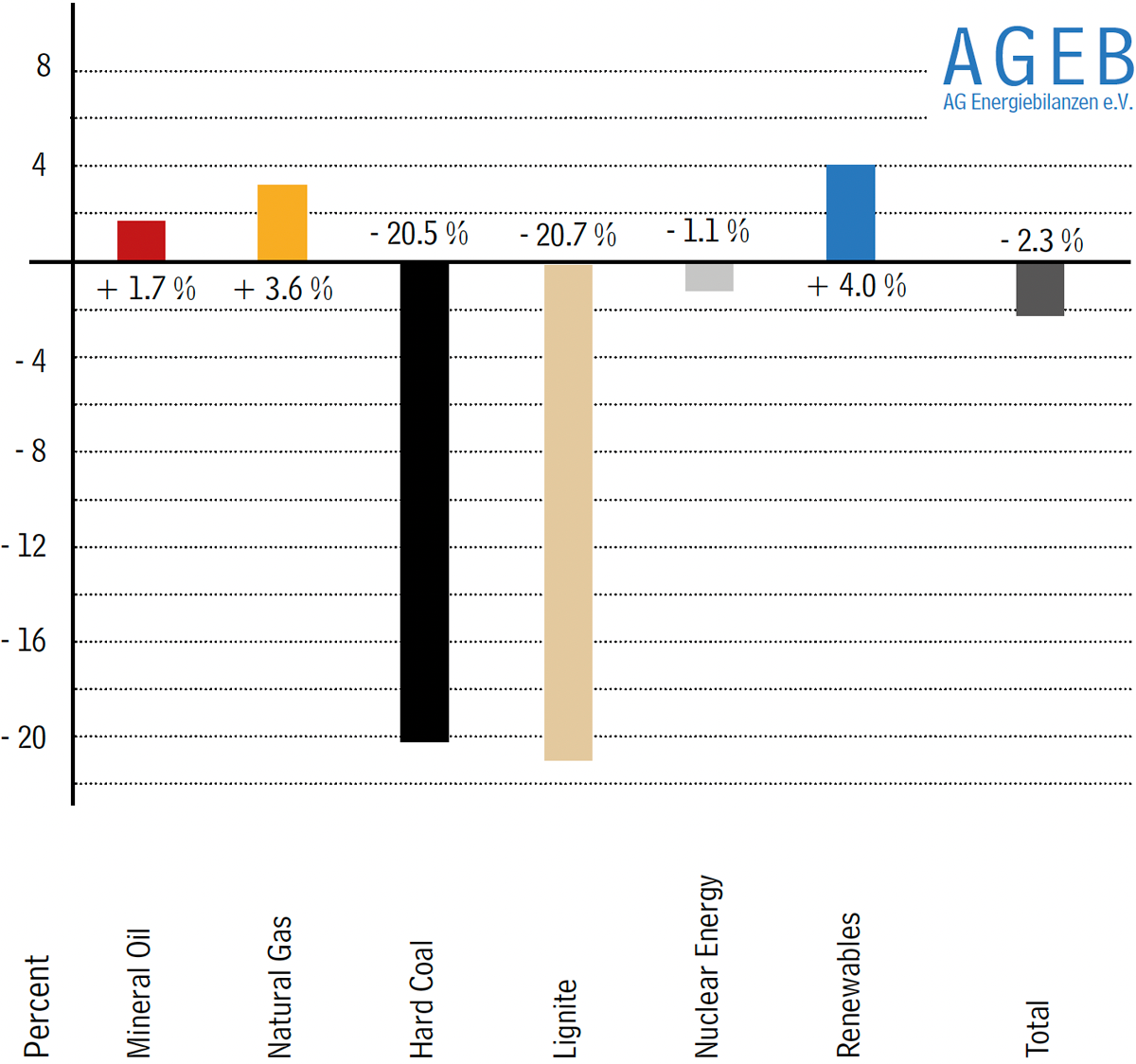 Shifts in the German Energy Mix

Structure of Primary Energy Consumption in Germany in 2019
Total Volume 12,815 PJ or 437.3 Mtce
Proportions in Percent (Previous Year in Parentheses) 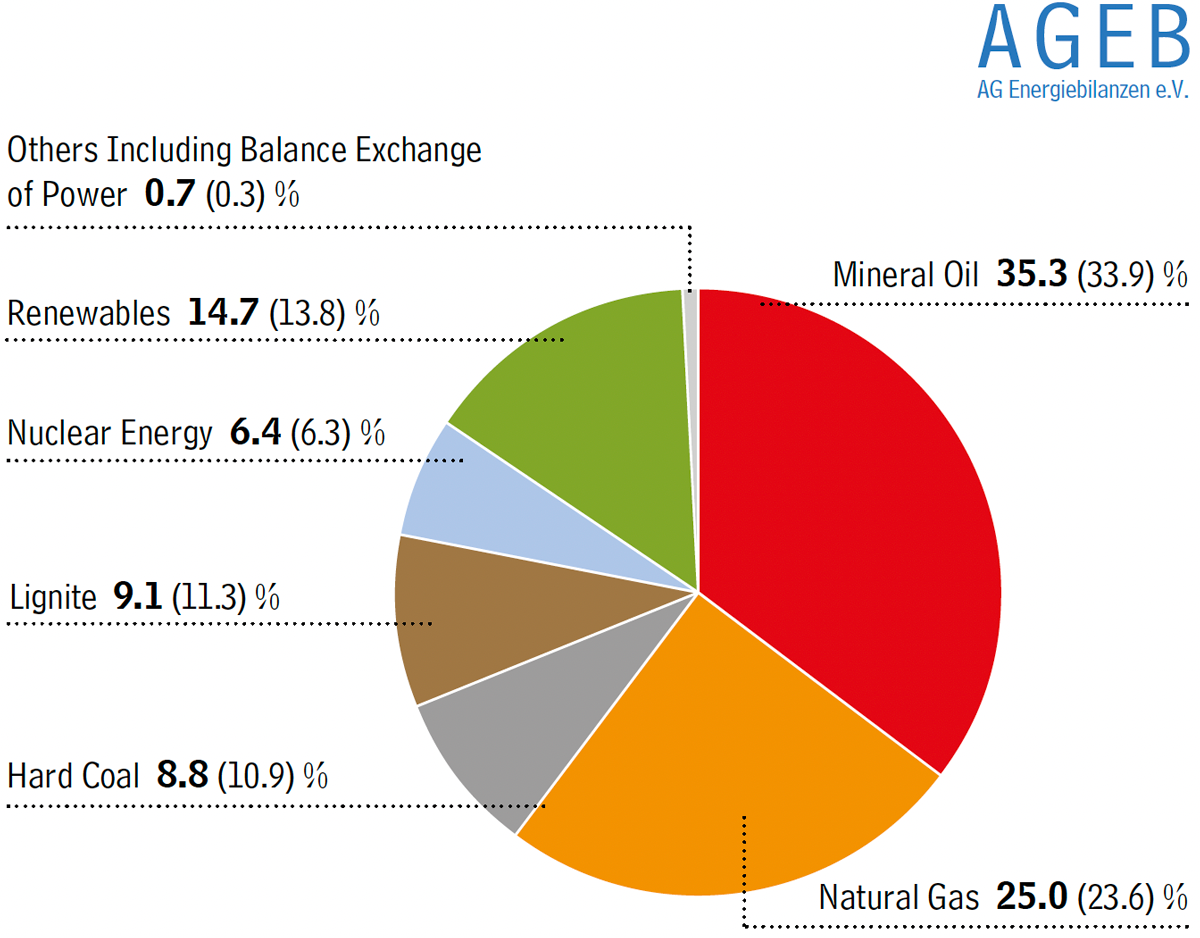 Berlin/Bergheim – The contributions of the diverse energy sources to the national energy mix have shifted in favor of renewables as well as natural gas in 2019. Mineral oil was able to augment its share as well. In contrast, significant declines were recorded for hard coal and lignite. The German energy supply, thus, reduced its carbon intensity even further in 2019.
A characteristic feature, however, continues to be the broad energy mix. 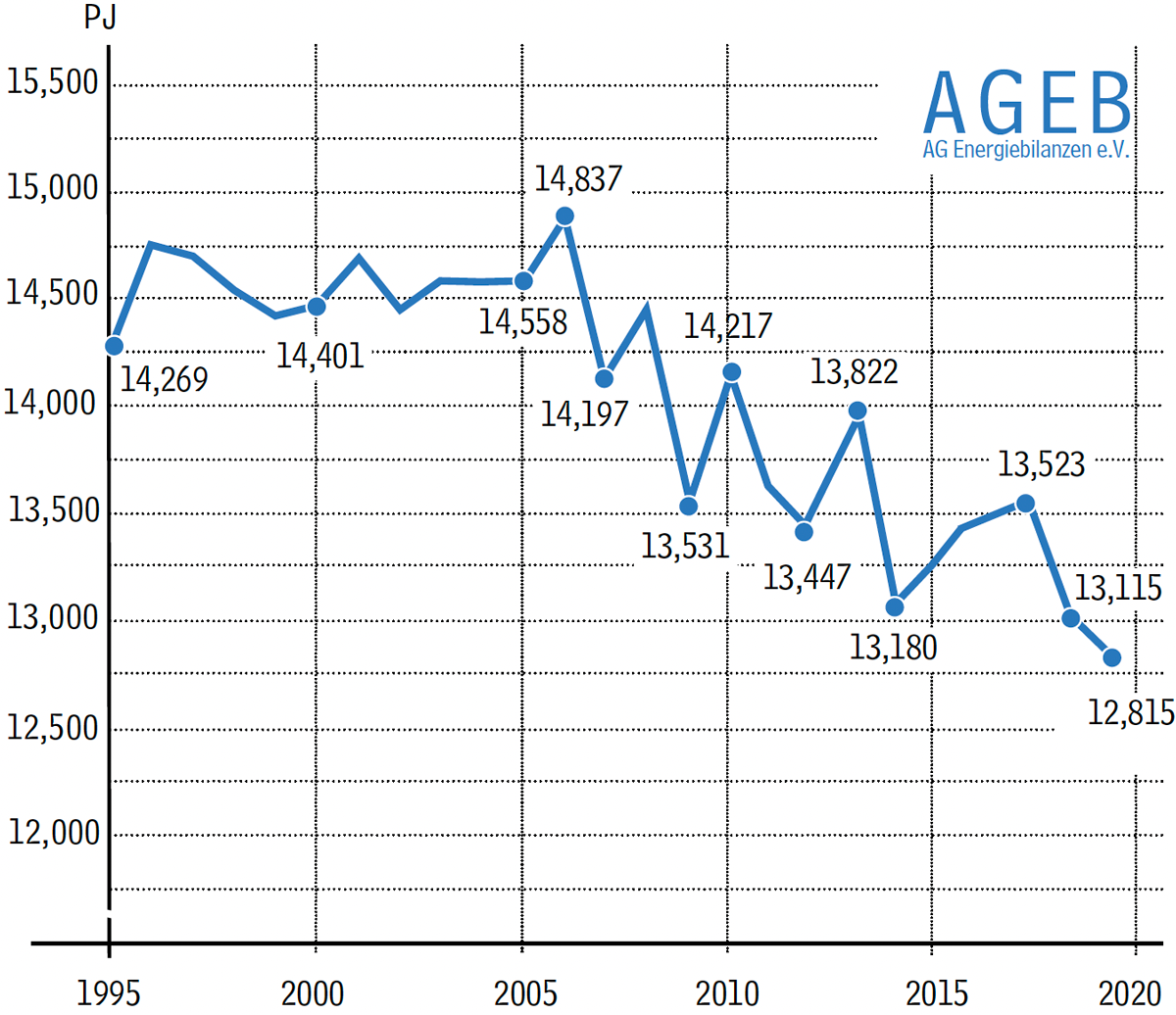 Berlin/Bergheim – According to preliminary estimates conducted by the Arbeitsgemeinschaft Energiebilanzen (AG Energiebilanzen) – Working Group on Energy Balances (Energy Balances Group), energy consumption in Germany in 2019 peaked at 12,815 petajoules (PJ) which translates into 437.3 million tons of coal equivalent (Mtce). It, thus, fell 2.3 percent below the level which had been reached in 2018.