Berlin/Cologne (20 December 2011) – Energy consumption in Germany 2011 clearly drop and it will reach an amount of 13,411 Petajoule (PJ). After provisional calculations by Arbeitsgemeinschaft Energiebilanzen (AG Energiebilanzen), the decrease is estimated at just 5 percent. The major influence on consumption trends last year was the mild weather, clearly reducing the need for heating. Another major factor in 2011 was the high price for energy. A further statistical effect results from the phasingout of nuclear energy and the development of power generation from renewable energies and also of power plants with higher efficien- cy. Corrected for the effect of weather, energy consumption in 2011 decreased by only one percent. Gross power generation is estimated to have dropped by just 3 percent.

Mineral oil consumption amounted last year to 4,549 PJ, thereby dropping to its lowest level since 1990. Compared with the previous year, consumption dropped by 3 percent. Increases occurred only for diesel, with sales up by 2 percent because of the economic situation. Petrol and kerosene, on the contrary, were slightly in the red. Demand for heating fuel fell sharply. Sales of light heating oil were 15 percent lower than the previous year and heavy heating oil decreased by 3 percent. In addition to the mild weather, prices were also especially competitive during the course of the year because of consumers waiting to purchase.

Consumption of hard coal in 2011 dropped slightly by 0.7 percent. In total 1,685 PJ were consumed. The input of hard coal to power plants, representing more than two thirds of total consumption, decreased by about 2 percent. The iron and steel industry increased its demand by about 4 percent. Deliveries to the heat market declined because of the weather.

Consumption of lignite increased by just 4 percent to 1,568 PJ. This increase mirrored the positive trends of deliveries to power plants, who take about 90 percent of domestic lignite production. Lignite products also increased.

Nuclear energy reduced its contribution to the energy balance, following the decision to phase-out, by just 23 percent in the course of the year.

The balance exchanges of power with neighboring European countries still showed at the end of 2011 a small excess of exports amounting to 5 terawatt hours (TWh). This trend hides a significant increase of imports of power and at the same time a decrease in exports of power.

The energy policy decisions adopted in 2010 and 2011 to promote renewable energies and to phase-out nuclear energy are reflected in the primary energy balance of the past year as slightly altered shares. However, the weather and stock levels have also influenced the structure of primary energy consumption. The main source of energy in 2011 remained oil with 33.8 percent. Oil is followed by natural gas, whose share decreased slightly to 20.6 percent. Hard coal increased its contribution to the energy mix to 12.6 percent and lignite reached a share of 11.7 percent. Nuclear energy dropped to 8.8 percent. Renewables in- creased their contribution to the energy mix to 10.8 percent. Other sources of energy and the balance of power exchanges amounted to 1.7 percent.

Following decreasing energy consumption, energy-related CO₂ emissions dropped by more than 3 percent. Corrected for weather, CO₂ emissions would have increased by about one percent. 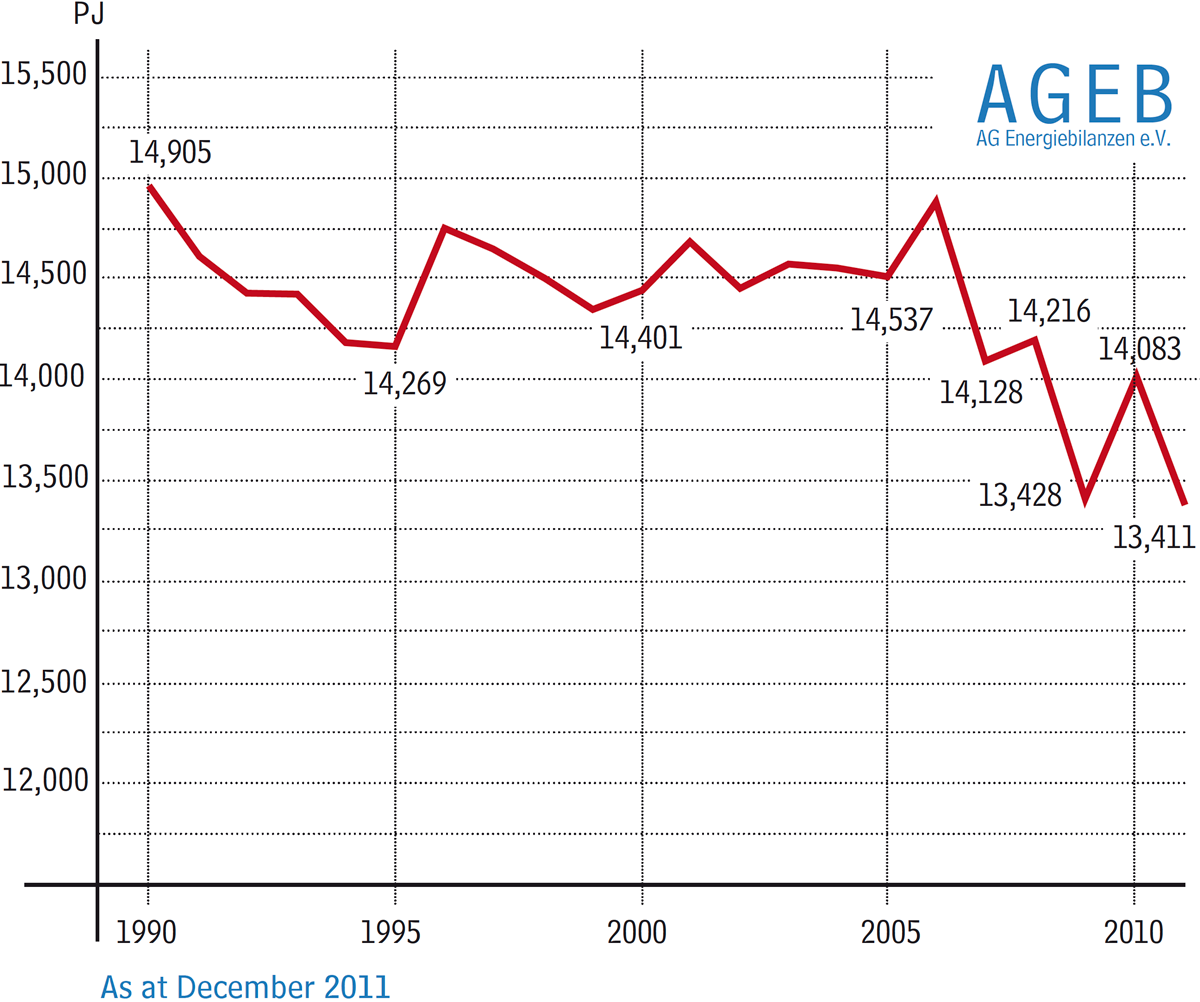 Energy consumption: Lignite and renewables in the black

Progress of the primary energy consumption 2011 in Germany Change in percent – Overall 13,411 PJ 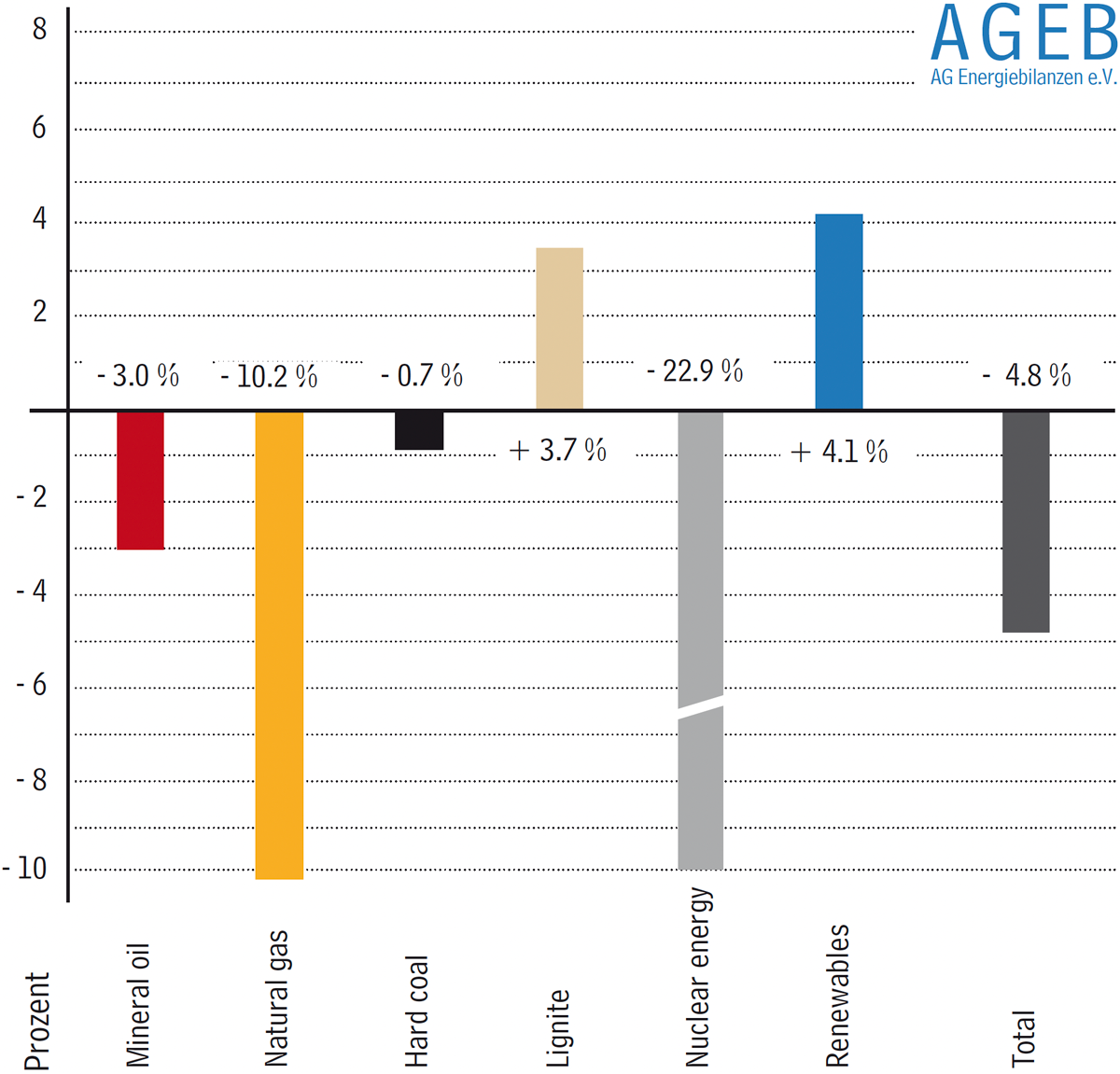 Berlin/Cologne – The energy demand in Germany in 2011 was 5 percent below the level of the year before, according to the calculations of the german AG Energiebilanzen. Especially natural gas and heating fuel reported decreases. The production of electricity from nuclear energy decreases because of the decisiions th phase out. The deliveries of lignite to power stations however increases. The renewables were able to increase their budget, due to good wind conditions and the extensions of photovoltaics. 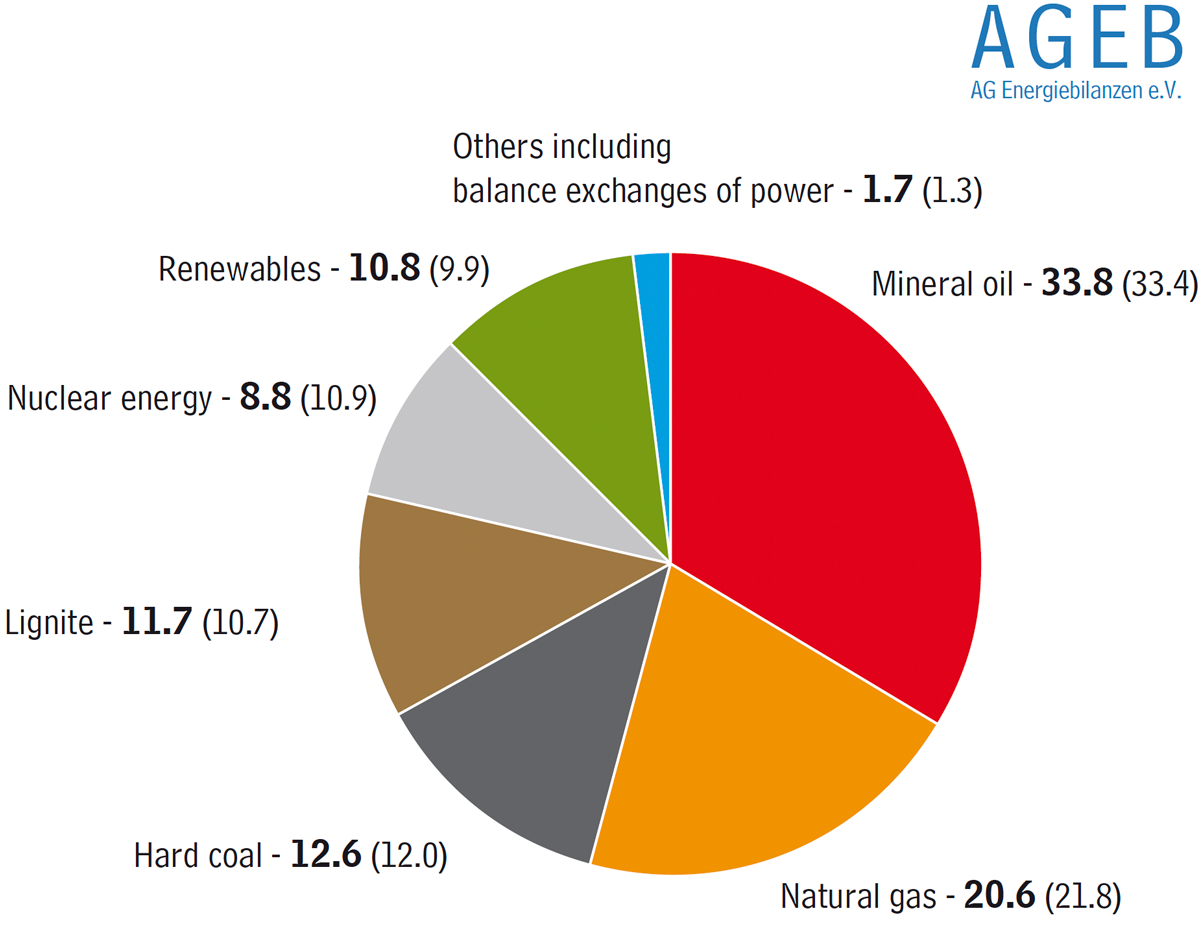 Berlin/Cologne – The decrease in consumption caused by the weather and the phase out of nuclear energy in Germany have changed the energy mix in Germany in 2011 slightly. The renewables contribute in double figures to the energy budget. Almost four-fifties of the energy demand are covered through fossil fuels.