Berlin/Bergheim (December 17, 2020) – In 2020, energy consumption in Germany decreased by 8.7 percent when compared to the previous year; with 11,691 petajoules (PJ), or 398.8 million tons of coal equivalent (Mtce), it dropped to a historic low level. When compared to 2006, the year with the highest energy consumption so far in Germany since German Reunification, the decline amounted to about 21 percent, reports the Arbeitsgemeinschaft Energiebilanzen (AG Energiebilanzen) – Working Group on Energy Balances (Energy Balances Group).

Due to the decreasing consumption as well as other shifts in the energy mix in favor of renewables and natural gas, the AG Energiebilanzen anticipates a decline in energy-related CO₂ emissions of approximately 80 million tons. This equals a decrease of about 12 percent when compared to the previous year.

The significant decline in the development of consumption was primarily due to the macroeconomic and sectoral effects of the coronavirus pandemic. This was accompanied by such long-term trends as the additional increase in energy efficiency, substitutions in the energy mix towards more renewable energy as well as the comparably mild weather. Slight consumption-enhancing effects emanated from the energy prices which dropped noticeably over the course of the year. According to estimates conducted by the AG Energiebilanzen, the consumption-dampening effect of the mild weather was largely offset by the stockpiling of light fuel oil.

Mineral oil consumption declined by a total of 12.1 percent to 3,965 petajoules (PJ), or 135.3 million tons of coal equivalent (Mtce), in 2020. While sales of gasoline and diesel fuel decreased slightly, the consumption of aviation fuel was reduced by half. Light fuel oil experienced increases in sales amounting to more than 5 percent because many consumers used the low prices to replenish their stocks. Supplies of naphtha for the chemical industry increased by about 3 percent.

Natural gas consumption decreased by 3.4 percent to 3,105 PJ, or 106.0 Mtce, in 2020. The primary reason for the decline in consumption was the reduced demand for natural gas in the industry as well as the trade, commerce, and service sectors which was a result of the coronavirus pandemic. In contrast, more natural gas was used for the production of electricity and heat. For private households, a slight plus in consumption is anticipated despite the comparably milder temperatures.

Hard coal consumption was 18.3 percent below the value for the same period last year and peaked at 894 PJ, which translates into 30.5 Mtce, in 2020. When it comes to the use of hard coal in power plants that generate electricity and heat, the decline amounted to more than 26 percent. This development is, in particular, due to the fact that electricity consumption experienced a decline, higher volumes of electric power from wind turbines and PV systems were fed into the grid, and more natural gas was used for the production of electricity. The weak demand for steel when compared to 2019 caused the use of hard coal in the steel industry to decrease by approximately 14 percent.

Lignite consumption dropped by 18.2 percent and amounted to 950 PJ, which translates into 32.4 Mtce, in 2020. This development has various causes: Additional power plant units were transferred into their standby mode for backup purposes; and due to the weather, higher volumes of electric power from wind turbines and PV systems were fed into the grid. This was accompanied by unplanned power plant outages, the effects of the coronavirus pandemic on power consumption as well as shifts in the competitive situation on the national and European electricity markets due to low prices for natural gas. While between the months of February and August, the consumption of lignite fell substantially below the respective months of the previous year, a significant recovery was recorded as of September.

Due to the scheduled shutdown of the power plant Philippsburg by the end of 2019, nuclear energy experienced a decline of 14.4 percent in the production of electricity in 2020.

All told, renewables increased their share in the total energy consumption by 3 percent to 1,962 PJ, or 66.9 Mtce, in 2020. Hydroelectric power plants (excluding pumped storage plants) supplied 5 percent less electricity than in the previous year. In contrast, the contribution of wind power increased by 7 percent. Solar energy recorded a plus of 9 percent. Biomass exhibited only a slight plus of 1 percent. Primary energy consumption from biogenic waste was 1 percent below the previous year’s value.

The consumption of other energy sources – primarily non-biogenic residential and industrial waste – dropped by almost 15 percent to a total of 189 PJ, which translates into 6.4 Mtce.

The proportions of the diverse energy sources of the national energy mix shifted further in 2020 when compared to the previous year: Fossil fuels experienced an overall decline so that the energy supply in Germany was able to reduce its carbon intensity even further. However, a characteristic feature continues to be the broad energy mix. More than 60 percent of the domestic energy consumption account for oil and gas. Hard coal and lignite collectively encompassed almost 16 percent of the consumption. Renewables increased their share to nearly 17 percent.

Development of Primary Energy Consumption in Germany in 2020
Estimated Changes in Percent – Total 11,691 PJ or 398.8 Mtce 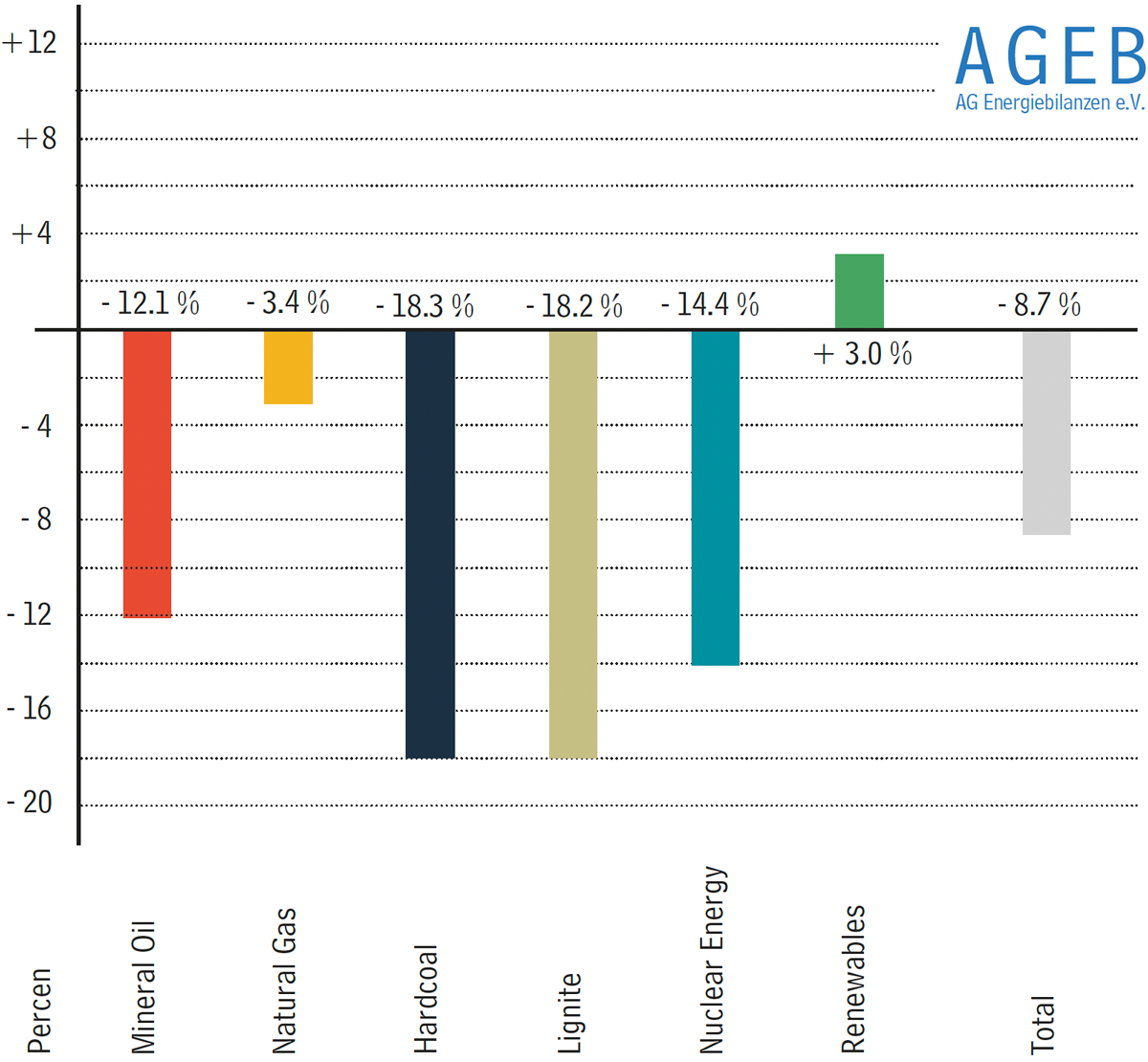 Berlin/Bergheim – In 2020, primary energy consumption in Germany fell in total
8.7 percent below the previous year’s level. According to preliminary calculations conducted by the Arbeitsgemeinschaft Energiebilanzen (AG Energiebilanzen) – Working Group on Energy Balances (Energy Balances Group), the total consumption peaked at 11,691 petajoules (PJ), which translates into 398.8 million tons of coal equivalent (Mtce). With the exception of renewables, all energy sources experienced a decline.

Structure of Primary Energy Consumption in Germany in 2020
Total Volume 11,691 PJ or 398.8 Mtce
Proportions in Percent (Previous Year in Parentheses) 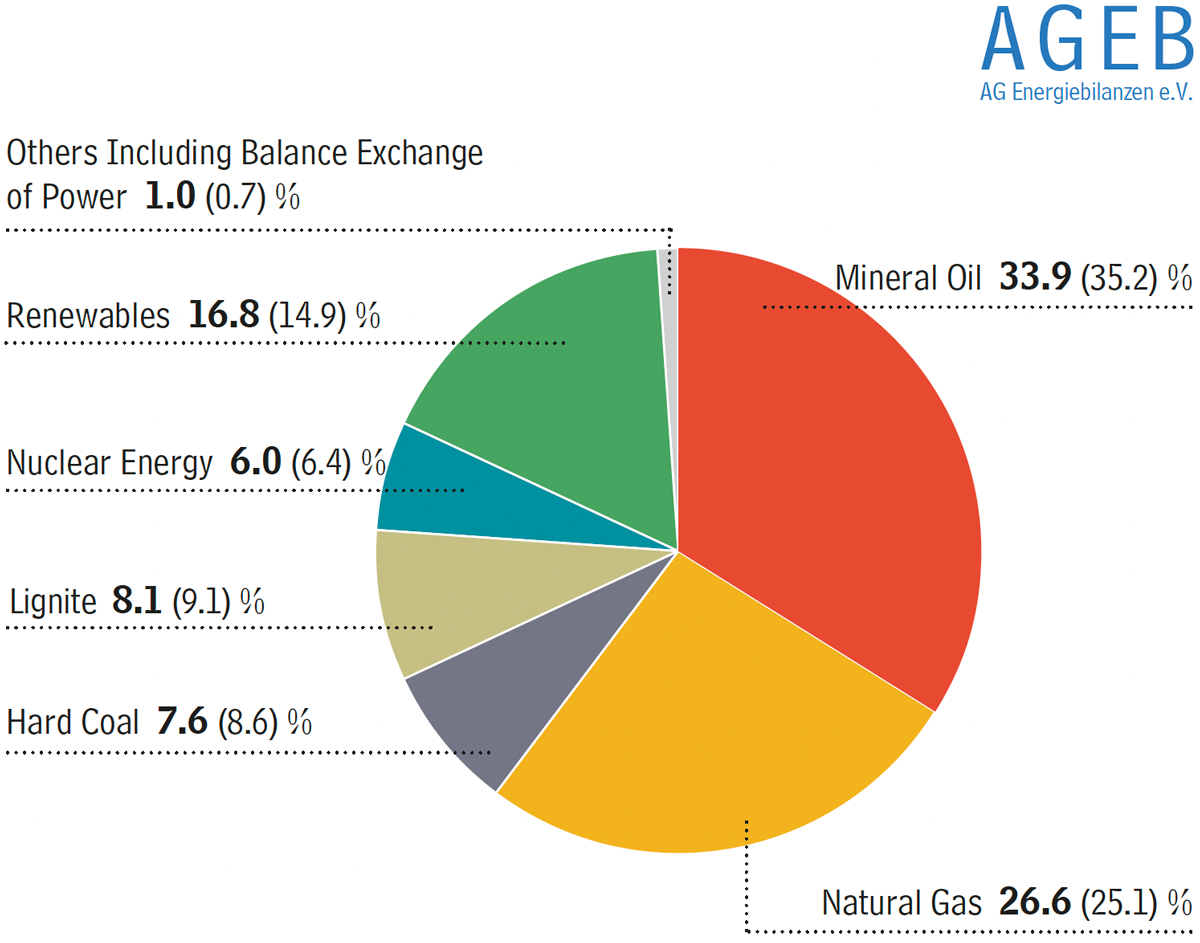 Berlin/Bergheim – The contributions of the diverse energy sources to the national energy mix have shifted slightly in favor of renewables as well as natural gas in 2020 while the total consumption volume turned out to be significantly smaller than had been the case in 2019. Hard coal and lignite experienced further declines. Despite its slightly reduced share, mineral oil continued to be by far the most important energy source. A characteristic feature of the German energy supply continues to be the broad energy mix. 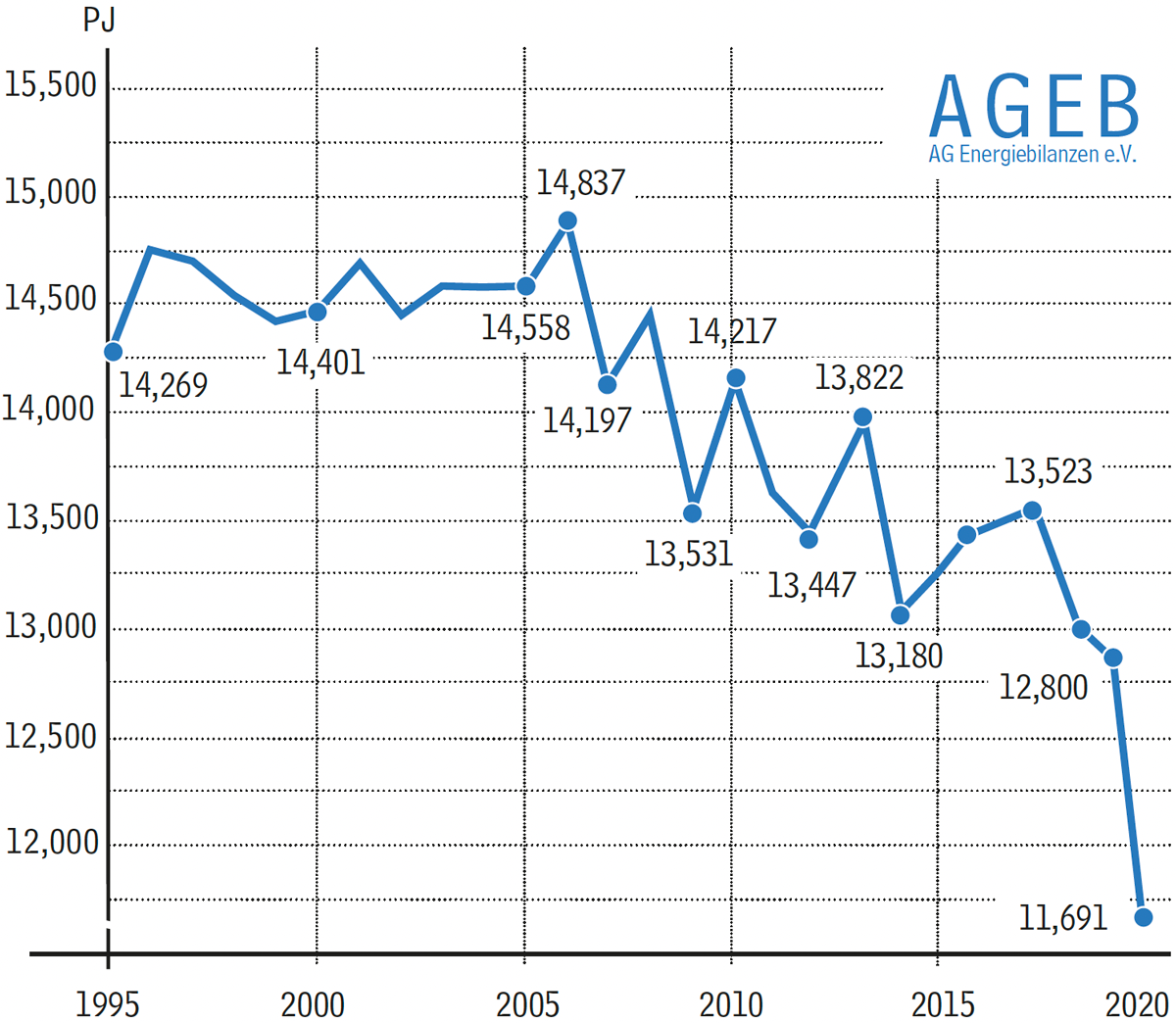 Berlin/Bergheim – According to preliminary estimates conducted by the Arbeitsgemeinschaft Energiebilanzen (AG Energiebilanzen) – Working Group on Energy Balances (Energy Balances Group), energy consumption in Germany in 2020 peaked at 11,691 petajoules (PJ) which translates into 398.8 million tons of coal equivalent (Mtce). It, thus, fell 8.7 percent below the level which had been reached in 2019.