Berlin/Cologne (December 20, 2016) – In 2016, energy consumption in Germany peaked at 13,427 petajoules (PJ), or 458.2 million tons of coal equivalent (Mtce). This equals an increase of 1.6 percent compared to the previous year. According to calculations and surveys conducted by the Arbeitsgemeinschaft Energiebilanzen (AG Energiebilanzen) – Working Group on Energy Balances (Energy Balances Group), the increase is due to the weather, which was cooler than the previous year, as well as this year’s leap day, the continuously positive economic trend, and the growth in population. The increase in consumption was abated by further improvements in energy efficiency, the AG Energiebilanzen explained. Increases in consumption were recorded for natural gas and mineral oil as well as renewables. Nuclear energy as well as hard coal and lignite exhibited a downturn. Without the impact of the weather, energy consumption would have increased by only 1 percent when compared to the previous year.

According to initial estimates made by the AG Energiebilanzen, energy-related CO₂ emissions will increase by 0.9 percent. The reduction of emissions, which is due to the decreased consumption of hard coal and lignite, was more than compensated by the higher consumption of natural gas and mineral oil. If adjusted to the weather effect and the leap day, then the increase in CO₂ emissions amounts to only 0.6 percent.

A Plus for Oil and Gas as well as Renewables

With an increase of 1.8 percent in 2016, mineral oil consumption was slightly higher than the previous year. Total consumption amounted to 4,562 PJ or 155.8 Mtce. The consumption of diesel fuel, which increased by 4.5 percent, contributed primarily to this trend. Sales of aviation fuel also exhibited a plus; they increased by 4 percent. In contrast, sales of gasoline remained virtually unchanged; and sales of light and heavy fuel oils declined by 3 percent respectively. Supplies of naphtha to the chemical industry dropped by almost 1 percent.

Natural gas consumption increased significantly by around 10 percent to 3,043 PJ or 103.8 Mtce. This growth in consumption was due to the cooler weather – primarily during the last quarter of the year – when compared to 2015 and the increased use of natural gas in power plants, particularly in cogeneration plants. In addition, new gas fired power plants went into operation.

Hard coal consumption dropped by 4 percent to 1,635 PJ or 55.8 Mtce. Its use in power plants for the generation of power and heat, thus, decreased by 6.2 percent. The use of coke and coal in the German steel industry remained to a large extent unchanged. All told, about two thirds of the entire hard coal consumption in Germany can be attributed to power generation. The use of hard coal for power generation was influenced by the fact that more electricity was produced from natural gas and more electricity was fed into the grid from offshore wind turbines.

Nuclear energy exhibited a minus of 7.4 percent compared to the previous year, which is due to a number of scheduled power plant overhauls and the decommissioning of the Grafenrheinfeld nuclear power plant in mid 2015.

Renewables enhanced their contribution to the energy balance by a total of 2.9 percent to 1,692 PJ or 57.7 Mtce. Biomass recorded a plus of 3 percent. While power generation from hydro power (excluding pumped storage) increased by 13 percent, wind power on land and off shore exhibited a slight overall increase of 1 percent. In contrast, the share of solar energy (photovoltaics and solar thermal energy) decreased by 1 percent.

The structure of energy consumption (energy mix) in Germany continues to be characterized by mineral oil (34 percent). As a result of its upswing, natural gas now covers almost 23 percent of the total consumption. Hard coal accounts for a proportion of more than 12 percent and lignite for about 11 percent. Renewables slightly increased their contribution to currently 12.6 percent. All told, the German energy supply is based on a broad mix of available energy sources. The export surplus in foreign electricity trade increased significantly because unscheduled declines in France’s power generation were covered by imports from Germany. 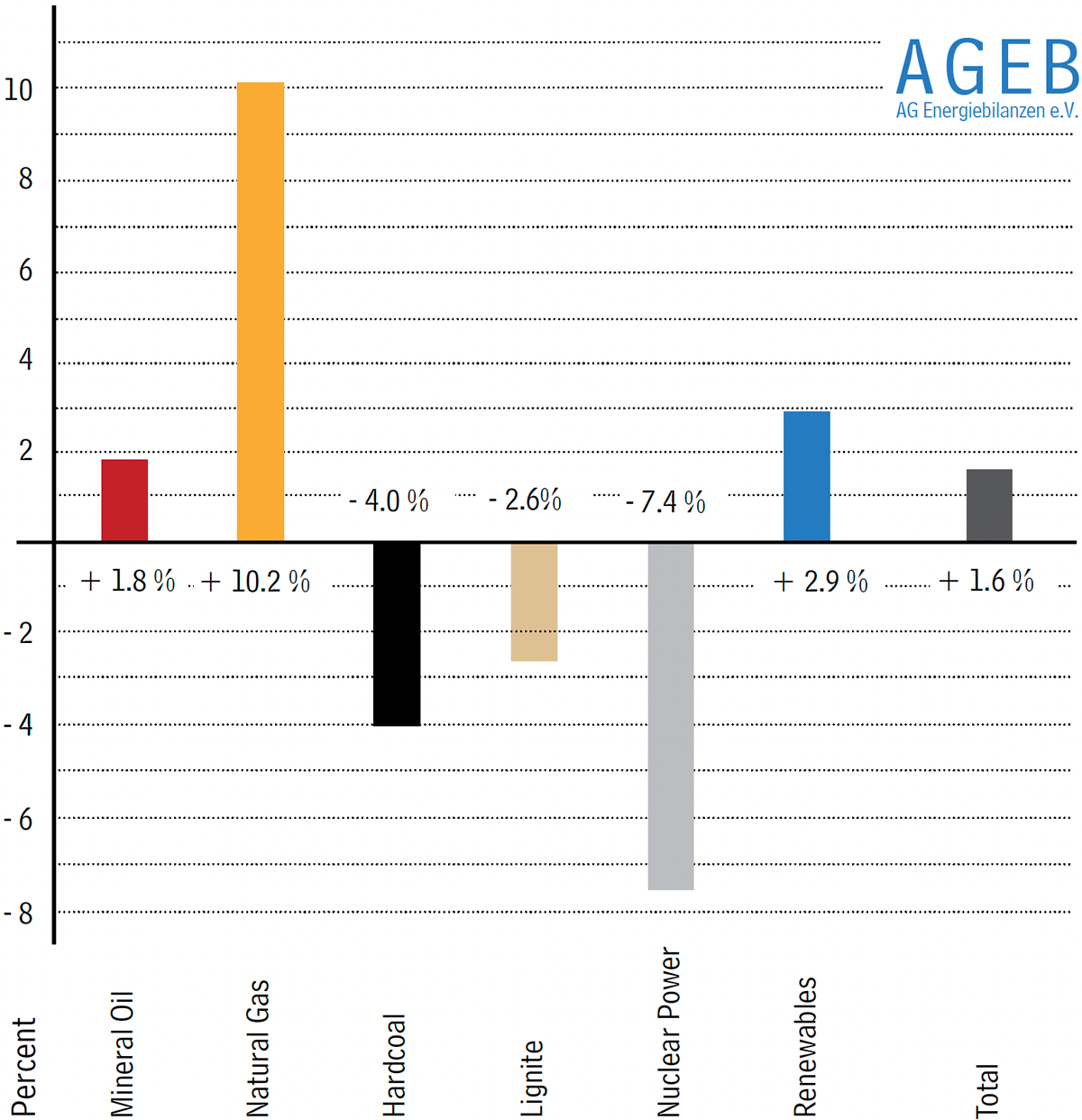 Berlin/Cologne – In 2016, the total energy consumption in Germany is 1.6 percent higher than the previous year which is primarily due to the weather. Mineral oil, natural gas, and renewables exhibit gains. In contrast, nuclear energy als well als hard coal and lignite are on a downswing. 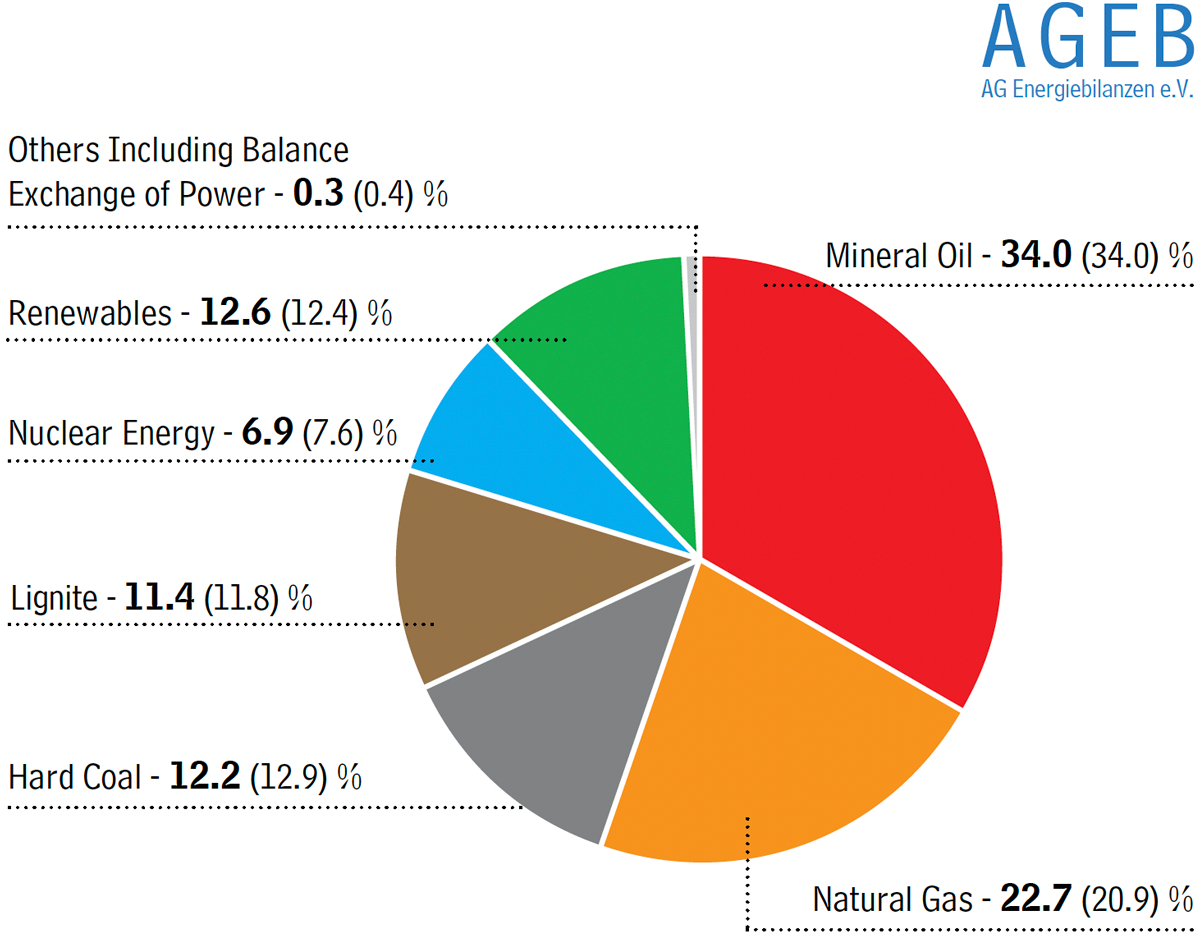 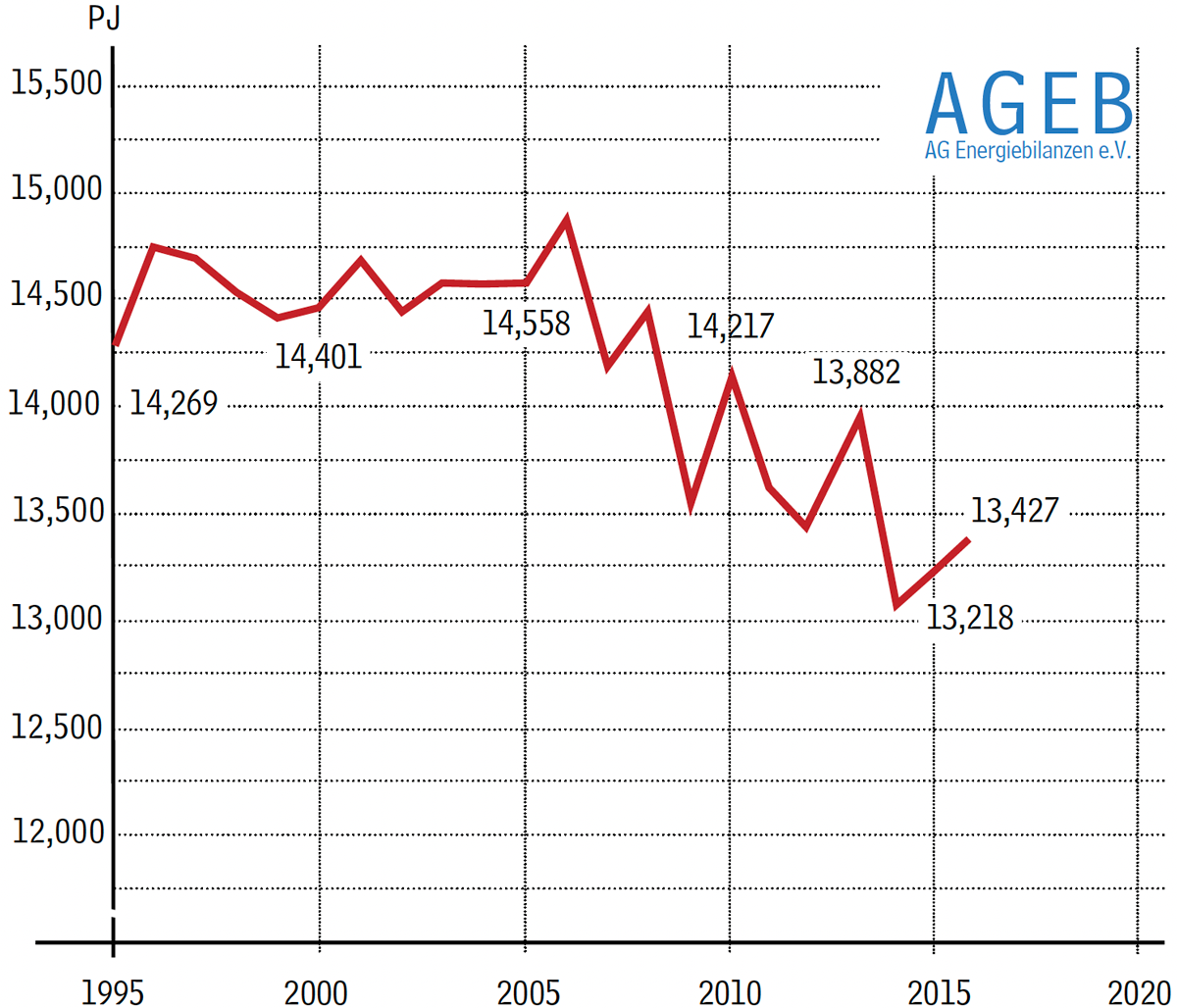 Berlin/Cologne – Energy consumption in Germany increased moderately once again in 2016. The weather, which was cooler than the previous year, as well as this year’s leap day, the continuously positive economic trend, and the growth in population all influenced this increase. When compared to previous years, overall consumption was at a low level.