Berlin/Cologne (December 21, 2015) – In 2015, energy consumption in Germany peaked at 13,335 petajoules (PJ), or 455.0 million tons of coal equivalent (Mtce). According to preliminary calculations made by the Arbeitsgemeinschaft Energiebilanzen (AB Energiebilanzen) – Working Group on Energy Balances (Energy Balances Group), this equals an increase of 1.3 percent compared to the previous year.

The increase is primarily due to the weather, which was slightly cooler than the very mild previous year, and the associated higher demand for heating energy. According to estimates of the AG Energiebilanzen, the increase in consumption resulting from the positive economic trend (+ 1.8 %) and the growth in population (+ 1 million people) was compensated by gains in energy efficiency.

In 2015, mineral oil consumption remained virtually unchanged at the previous year’s level. Total consumption amounted to 4,511 PJ or 153.6 Mtce which is 0.1 percent less than in 2014. While the consumption of diesel fuel increased by almost 4 percent, which is primarily due to the higher demand from the transportation and construction sectors, gasoline consumption exhibited a minus of 2 percent because of the declining numbers of passenger cars with gasoline engines. Sales of aviation fuel remained at last year’s level. For light fuel oil, an increase in sales failed to appear despite the low prices because consumers met their increased demand primarily from the existing stocks.

Natural gas consumption went up by 5 percent to 2,804 PJ or 95.7 Mtce. This was mainly due to the weather during the first half of the year, which was actually cooler when compared to the very mild temperatures of the previous year, and to the associated increase in using natural gas for heating purposes. However, the weather during the fourth quarter of the year, which was once again very mild, dampened this growth quite considerably. With a minus of 7 percent, there was another decline in power generation from natural gas.

Hard coal consumption in 2015 dropped by 0.7 percent to 1,691 PJ or 57.7 Mtce. Hard coal participated in an increase in power generation in Germany also because of the very low global market prices. The use of hard coal in power plants, thus, decreased only moderately by about 0.8 percent. Sales to the iron and steel industry remained stable at the previous year’s level. All told, around two thirds of the entire hard coal consumption in Germany can be attributed to power generation.

Nuclear energy exhibited a minus of almost 6 percent, which is due to the decommissioning of the Grafenrheinfeld nuclear power plant in mid-year.

Renewables enhanced their contribution by a total of about 11 percent to 1,679 PJ or 57.3 Mtce. While power generation from biomass increased by about 2 percent, the proportion of hydro power (excluding pumped storage) remained at the previous year’s level. Wind power on land and off shore exhibited a plus of 50 percent compared to the previous year. The share of solar energy (photovoltaics and solar thermal energy) increased by 6 percent. Bio fuels experienced a decline of 5 percent.

The export surplus for power increased considerably. Other energy sources, primarily domestic and industrial waste, experienced a plus of almost 4 percent.

The Energy Mix Adjusts Itself

The structure of energy consumption (energy mix) continues to be characterized by the high proportion of mineral oil (33.8 percent). Natural gas covers more than one fifth of the total consumption. Hard coal and lignite jointly cover more than one quarter of the energy consumption in Germany with each contributing almost the same share. Renewables increased their contribution in 2015 by more than one percent to 12.6 percent. All told, German energy supply is based on a broad mix of available energy sources.

Energy Consumption in 2015
Slightly above the Previous Year 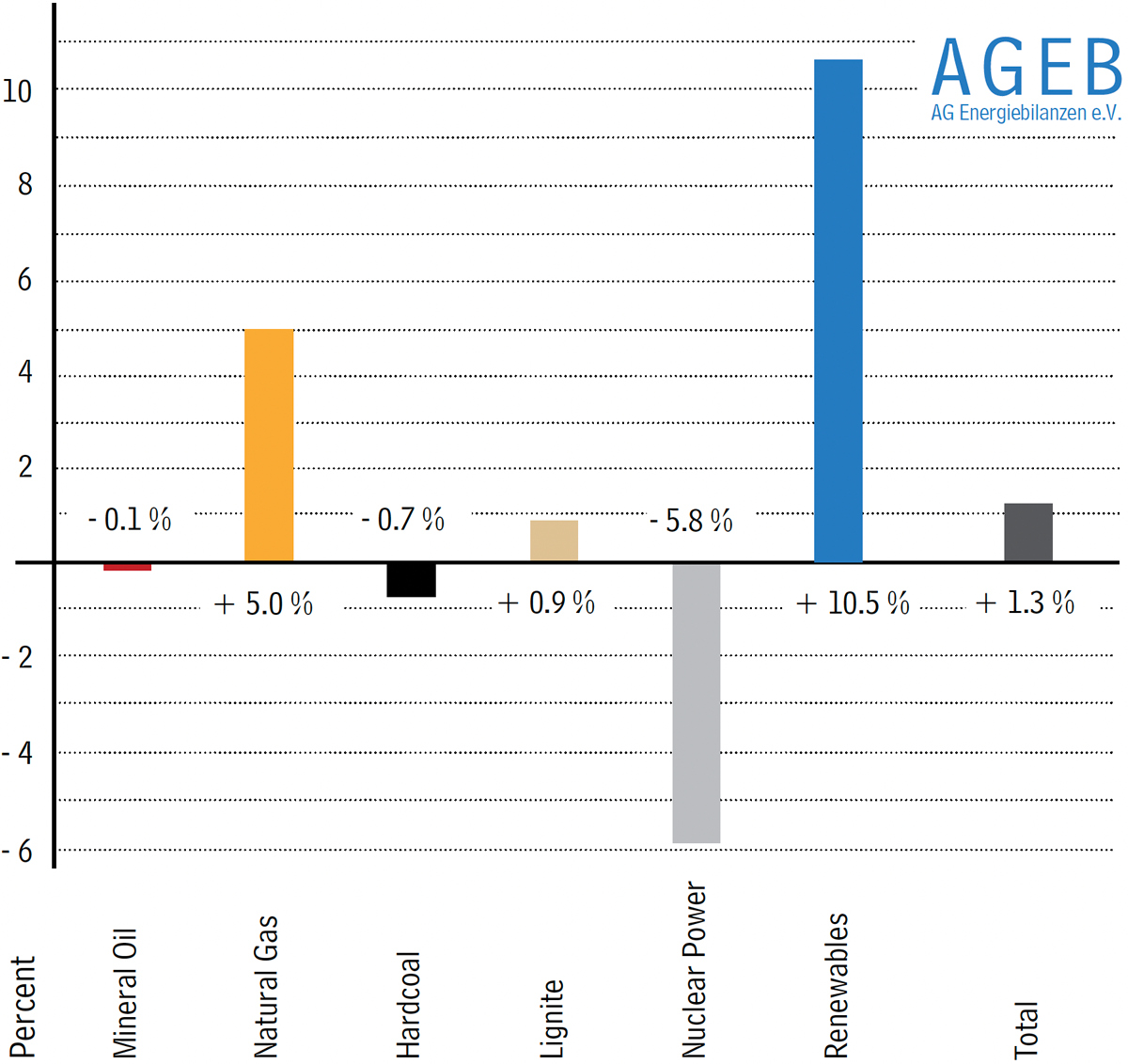 Berlin/Cologne – According to preliminary calculations made by the AG Energiebilanzen, energy consumption in Germany amounted to 13,335 petajoules (PJ) or 455.0 million tons of coal equivalent (Mtce) in 2015 which was 1.3 percent higher than the previous year. 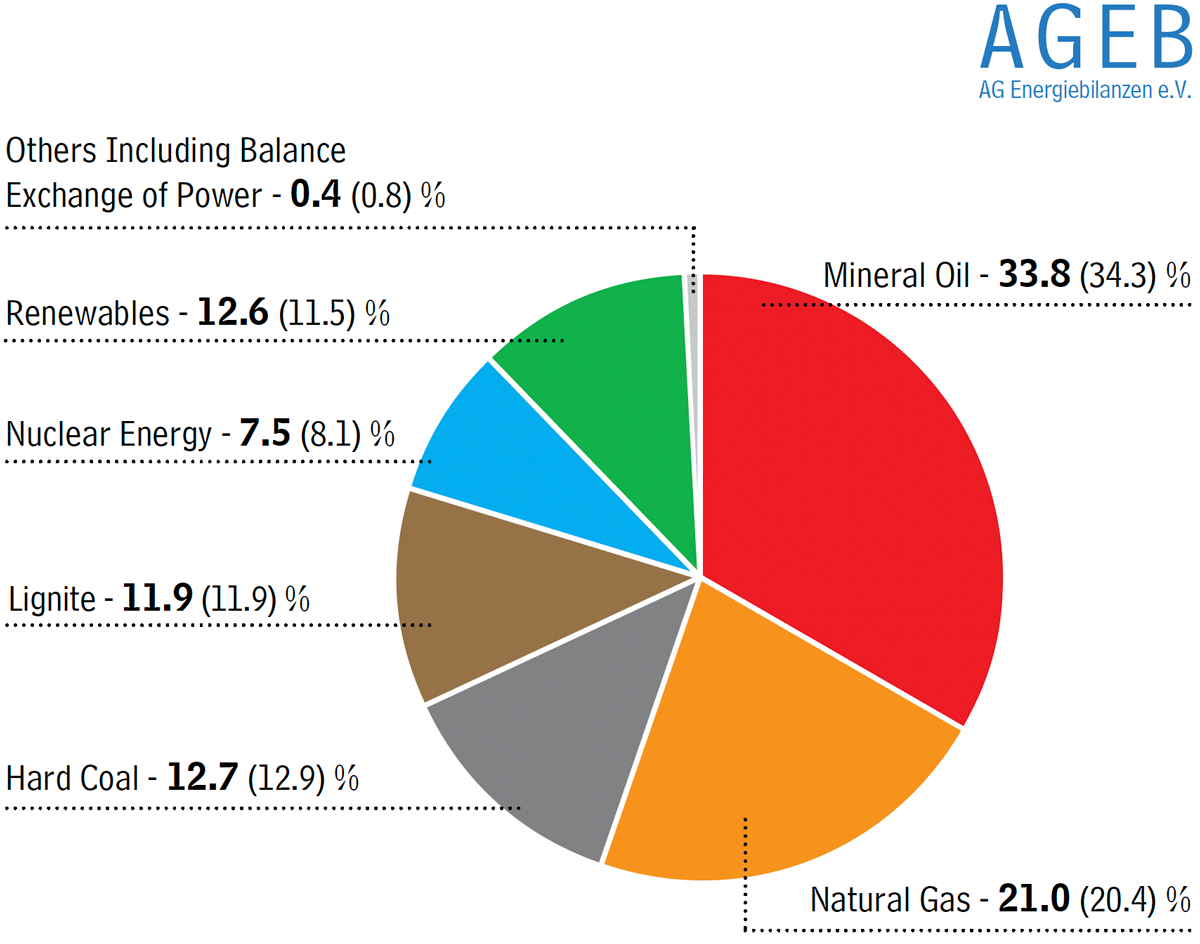 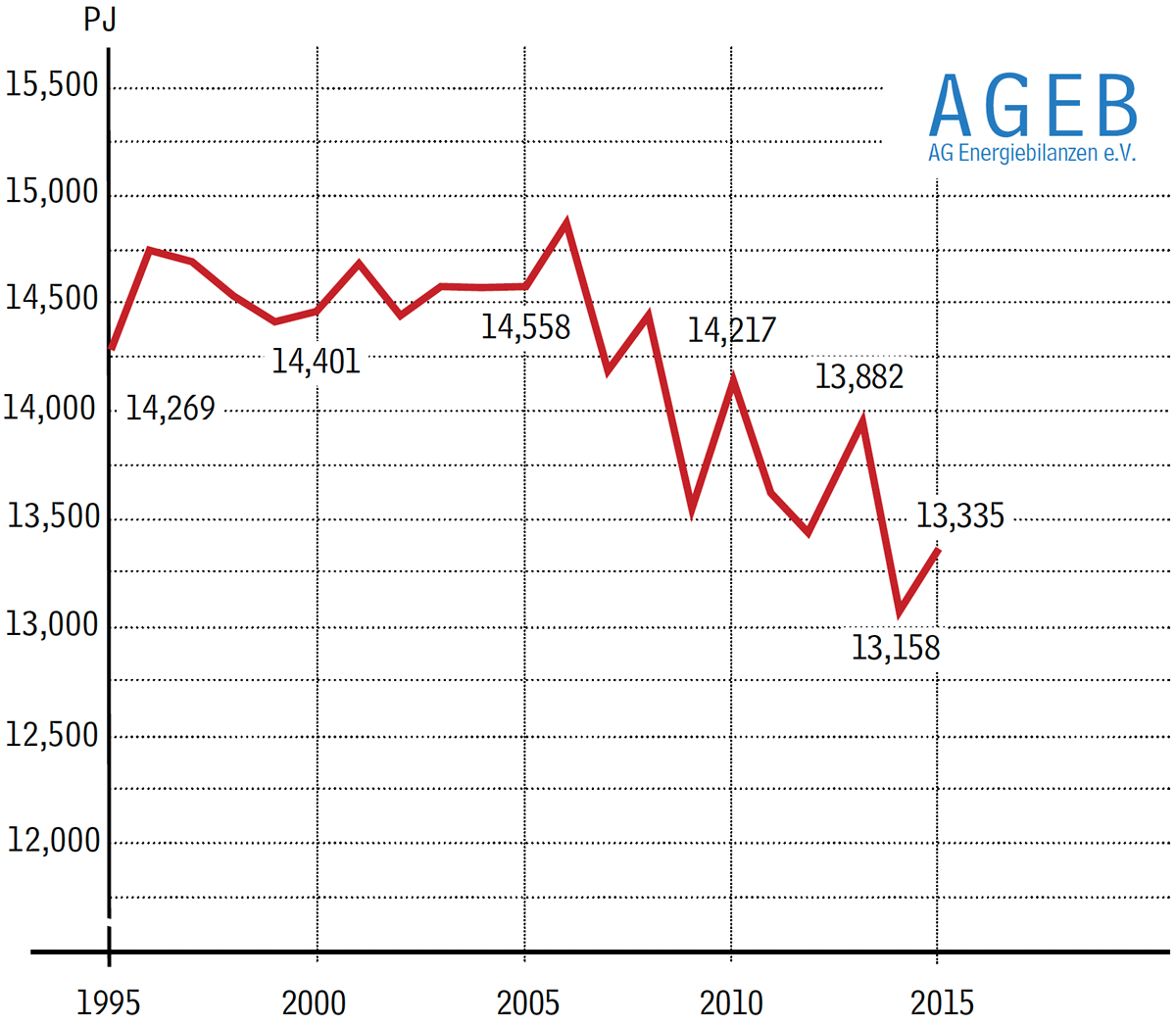 Energy consumption in Germany increased moderately in 2015. The slightly cooler weather had the greatest impact on this increase. When compared to previous years, overall consumption was at a low level.