Berlin/Cologne (19 December 2012) – Energy consumption in Germany in 2012 will only be slightly higher than the previous year. The major influence was the cool weather for several months during the first half of the year and also the fact that it was a leap year. Due to the economic slowdown, there were hardly any consumption-enhancing influences. There were also other consumption-dampening factors such as the increase in energy efficiency. In total in 2012 in Germany, according to preliminary calculations by the Arbeitsgemeinschaft Energiebilanzen (AG Energiebilanzen) – Working Group on Energy Balances (Energy Balances Group), 13,512 petajoules (PJ), or 461.1 million tonnes of coal equivalent (Mtce), were consumed.

Coal consumption increased by 3.1 percent to 1,671 PJ (57.0 Mtce). This development is mainly due to an increased use for electricity and heat production. The steel industry, in contrast, diminished its demand for coke and coal by more than 4 percent. The share of coal in total energy consumption in 2012 increased slightly to 12.4 percent (previous year 12.1%).

Lignite consumption increased by about 5 percent to 1,642 PJ (56.0 Mtce). The commissioning of three new power plant units had a significant impact on this increase. By the end of the year, several old plants were taken off the grid, so that the use of lignite for power generation in the coming year will fall again. In 2012 the share of lignite in total energy consumption was 12.2 percent (previous year 11.6%) due to this special factor.

Nuclear energy decreased its contribution to the energy balance in the wake of the decision to shut down, by about 8 percent. Its share of the energy mix dropped to 8 percent.
The use of renewables in 2012 increased by nearly 8 percent. Renewables thereby increased their share of total consumption to 11.7 percent (previous year 10.9%). Compared with the previous year, wind decreased by 8 percent. For hydro (excluding pumped storage), however, there was an increase of 16 percent. Photovoltaic continued its dynamic expansion and increased by almost 50 percent.

In 2012 Germany enjoyed a diverse energy mix. The declining share of nuclear energy goes together with increasing amounts of renewable energy. The increased contribution of coal in 2012 is due, for lignite, to the modernisation of old installations and for coal, to its current favourable competitive position over natural gas for power generation. In 2012, oil and natural gas also made stable contributions to the country‘s widely diversified energy supply.

In Germany, increased energy consumption and increased use of fossil fuels are expected to result in an increase in CO₂ emissions, in absolute terms. Adjusted for the effect of temperature, CO₂ emissions have slightly decreased. 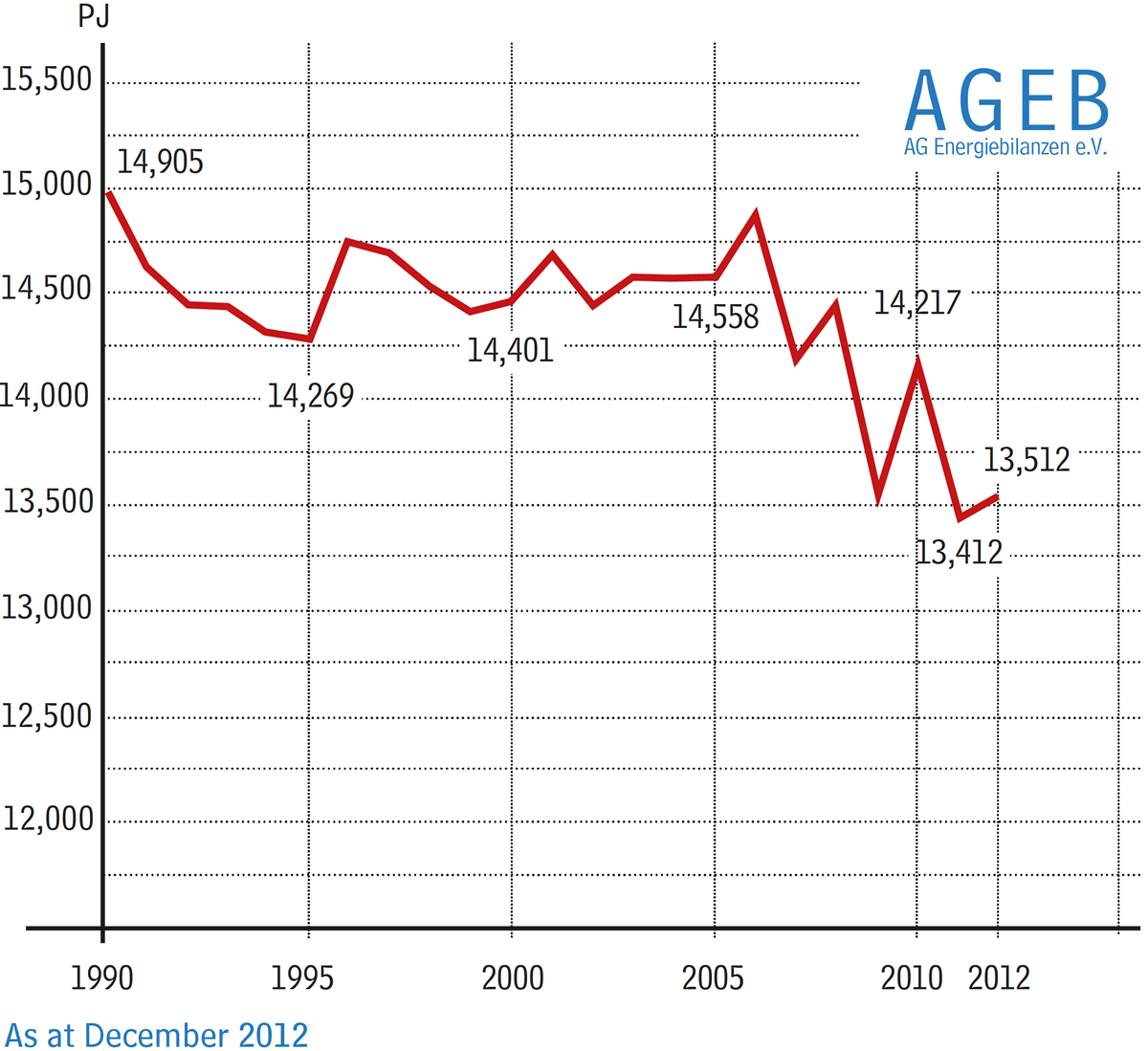 Progress of the primary energy consumption 2012 in Germany Change in percent – Overall 13,512 PJ 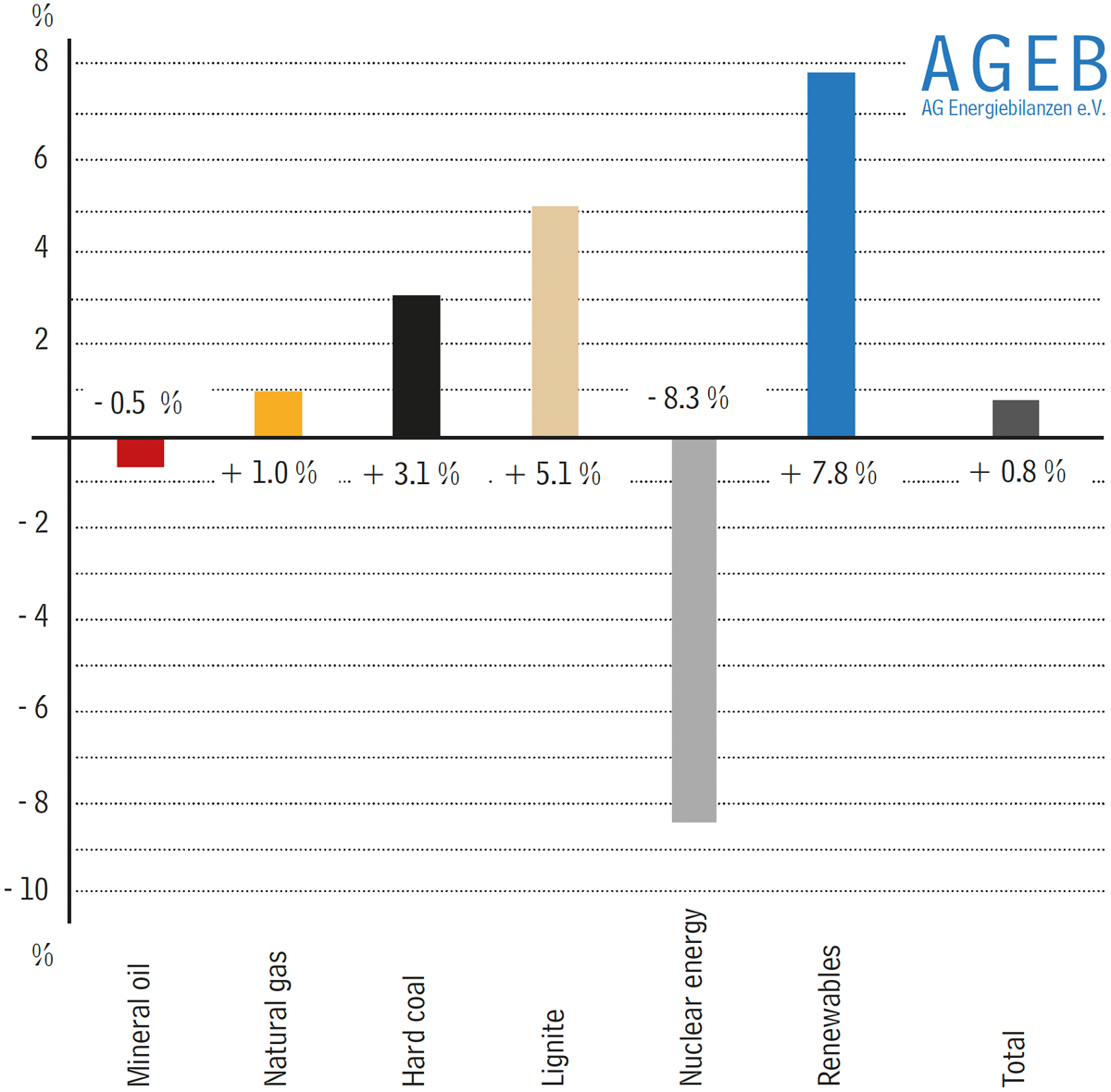 Berlin/Cologne – Energy demand in Germany in 2012 was slightly higher than the year before. According to the calculations of german AG Energiebilanzen, total 13,512 Petajoule (PJ) were consumed. Oil reported a decrease and the use of natural gas, hard coal and lignite increased. The renewables recorded a remarkable increase. The production of electricity from nuclear energy decreases because of the decisions to phase out. Priority influence to energy use in 2012 were low temperatures.

Structure of the primary energy consumption in Germany Rates in percent (Previous year in the brackets)
Overall 13,512 PJ 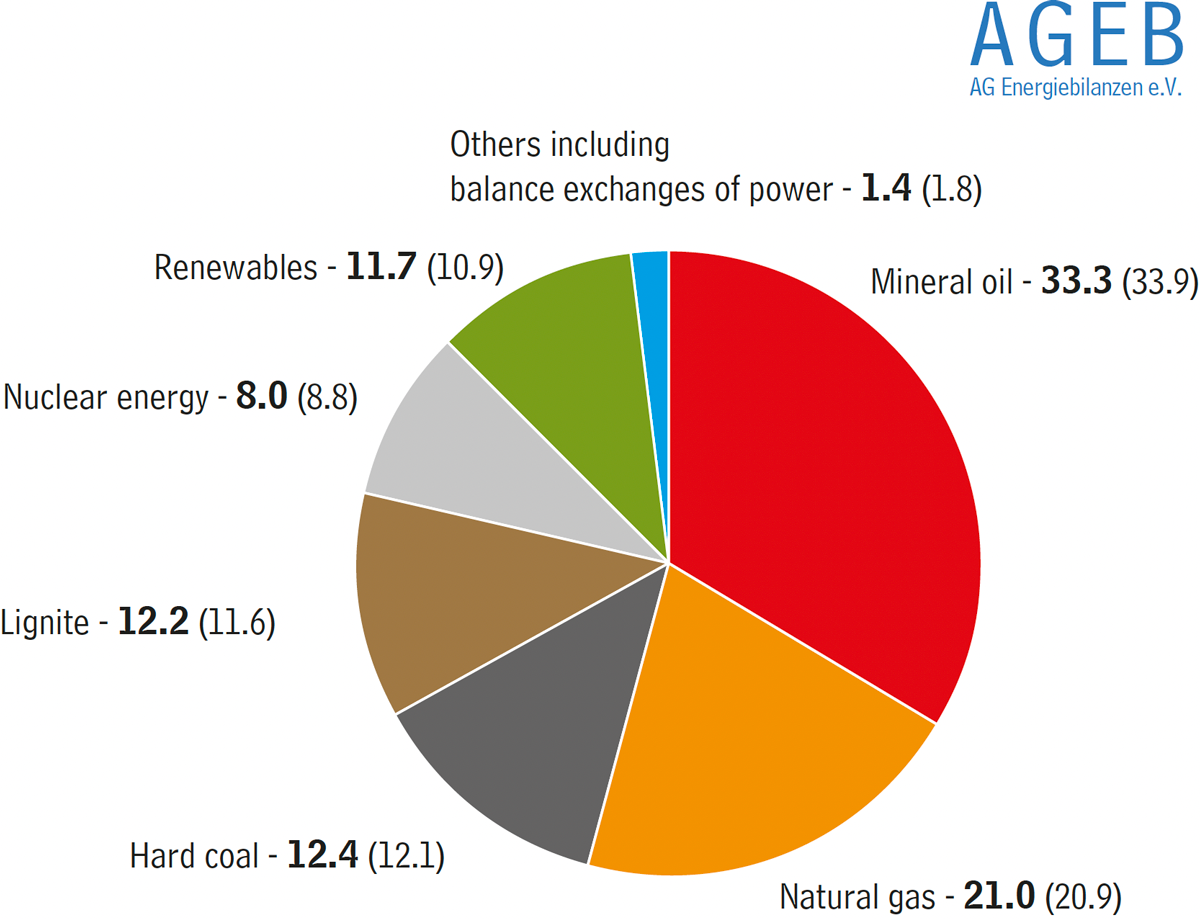 Berlin/Cologne – The increase of renewables, the phase out of nuclear energy and low temperatures have changed the energy mix in Germany in 2012 slightly. The renewables contribute a part of nearly 12 percent to the energy budget. Almost four-fifths of the energy demand are covered through fossil fuels.