Since the declines in consumption affected all fossil fuels whereas increases were only reported for renewables, the AG Energiebilanzen anticipates a decline in energy-related CO₂ emissions amounting to well above 6 percent.

Mineral oil consumption decreased by a total of 5.6 percent in 2018. Sales of fuel oils recorded the strongest decline. Gasoline and diesel fuel decreased only slightly; in contrast, sales of aviation fuel exhibited a plus.

Hard coal consumption in Germany decreased by 11.2 percent in 2018. With more than 16 percent, the use of hard coal for the generation of power and heat in power plants exhibited a particularly strong decline. The increase in both the power generation from renewable sources as well as the increase in fuel costs, particularly CO₂ prices, contributed to this decline. The consumption of coke and coking coal in the German steel industry was below the previous year’s level.

Lignite consumption went down for the sixth time in a row in 2018. The decline in 2018 amounted to 1.9 percent because the power generation from lignite declined as well. Due to the transfer of power plant units into their standby mode for backup purposes, the use of lignite for power generation will decrease by a total of 13 percent by 2020 when compared to 2015.

Renewables enhanced their contribution to the total energy consumption in 2018 by a total of 2.1 percent. Wind energy had a plus of 7 percent. Solar energy exhibited a plus of 16 percent. Biomass remained at the previous year’s level and hydro power recorded a minus of 16 percent.

Compared to the previous year, the contributions of the diverse energy sources to the national energy mix have shifted further in 2018: Fossil energy experienced an overall decline so that the German energy supply was able to reduce its carbon intensity even further. A characteristic feature, however, continues to be the broad energy mix. Oil and gas account for almost 58 percent of the domestic energy consumption. Hard coal and lignite collectively covered slightly more than one fifth of the consumption. Renewables increased their share to 14 percent.

Substantial Drop in Energy Consumption in 2018 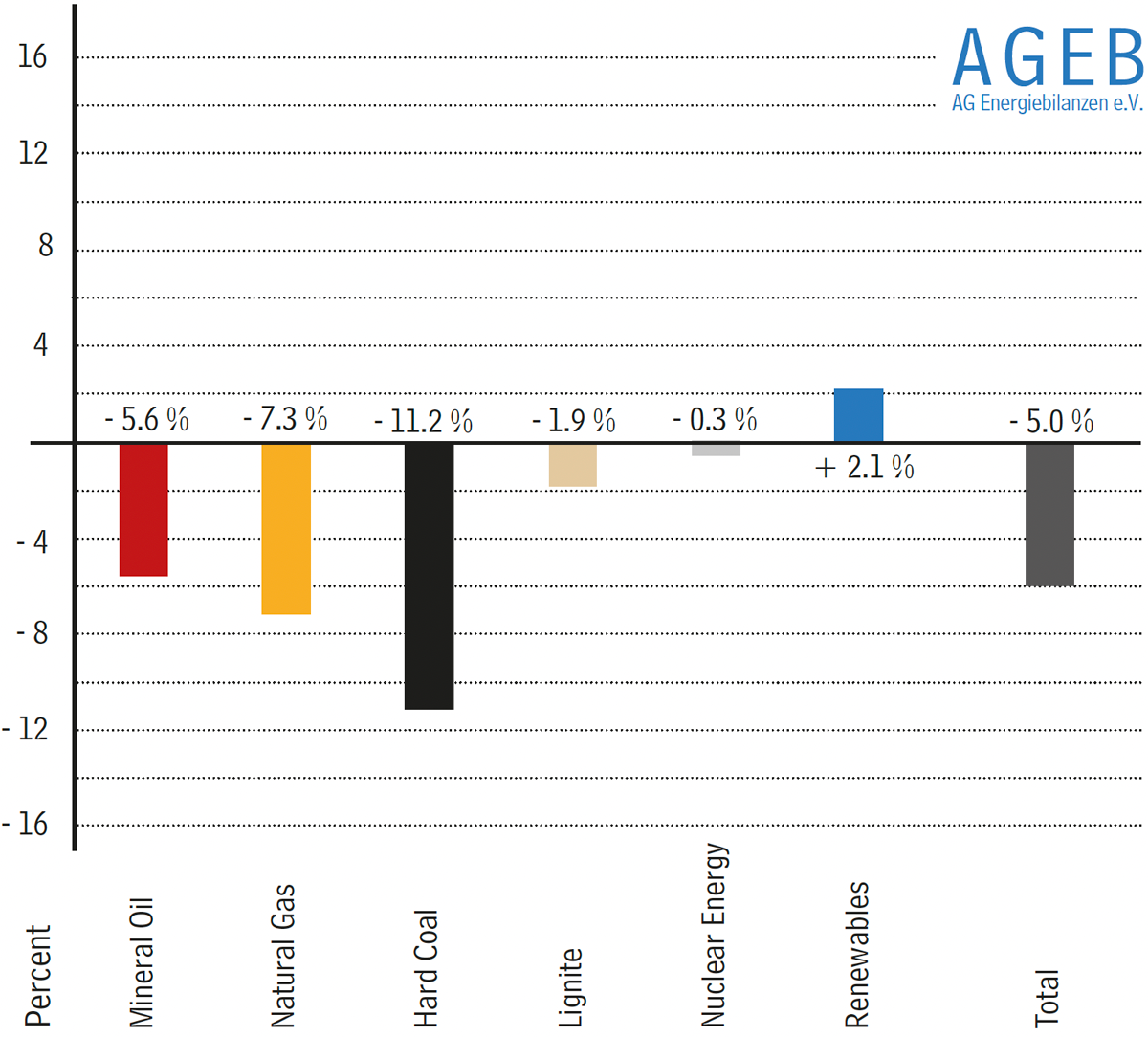 Structure of Primary Energy Consumption in Germany in 2018
Total Volume 12,900 PJ or 440.2 Mtce
Proportion in Percent (Previous Year in Parentheses) 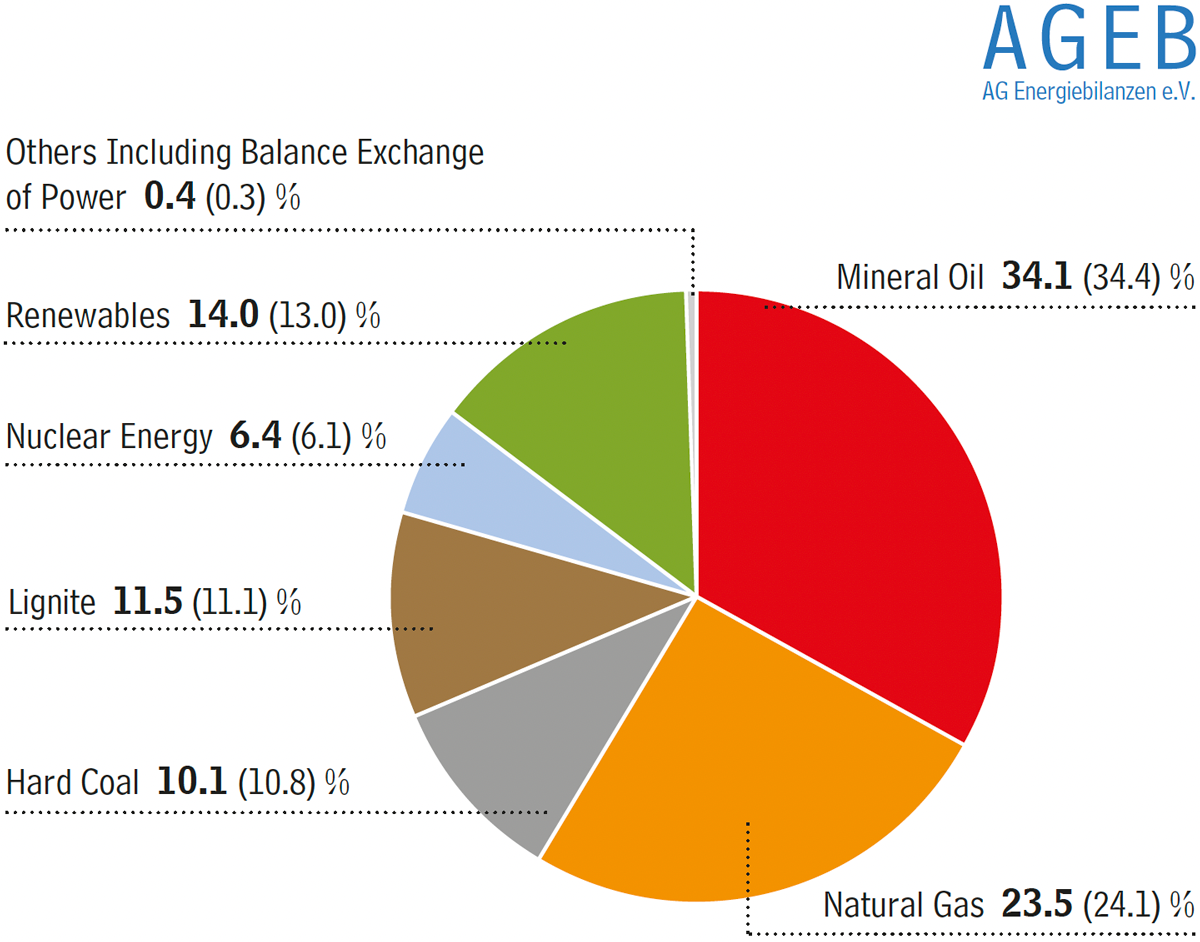 Berlin/Bergheim – The contributions of the diverse energy sources to the national energy mix have shifted further in favor of renewables in 2018. An overall decline was recorded for fossil fuels. The German energy supply, thus, reduced its carbon intensity even further. A characteristic feature, however, continues to be the broad energy mix. 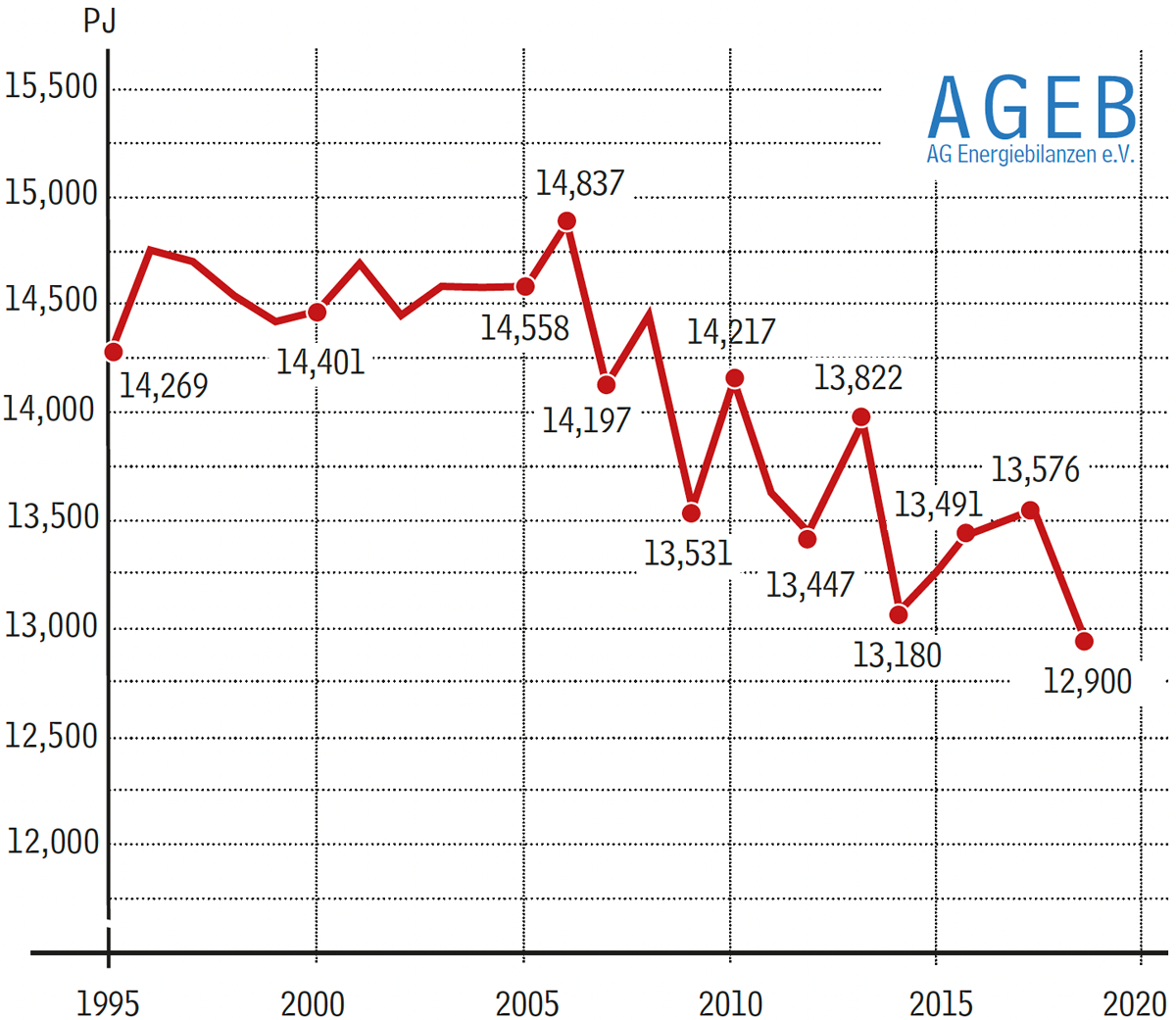 Berlin/Bergheim – In 2018, energy consumption in Germany peaked at 12,900 petajoules (PJ) which translates into 440.2 million tons of coal equivalent (Mtce). It, thus, fell 5 percent below the level that had been reached in 2017. The decline in consumption affected all fossil fuels as well as nuclear energy. Renewables exhibited an increase of about 2 percent.