Berlin/Bergheim (May 6, 2019) – Germany‘s energy consumption in 2018 decreased to its lowest level since the early 1970s. With a total volume of 12,963 petajoules (PJ), or 442.3 million tons of coal equivalents (Mtce), consumption was actually 3.5 percent below the previous year’s level. As outlined by the Arbeitsgemeinschaft Energiebilanzen (AG Energiebilanzen) – Working Group on Energy Balances (Energy Balances Group) in its recently published Annual Report for 2018, this development is due to significantly increased prices for energy, the mild weather as well as a strong increase in energy productivity. In contrast, the consumption-enhancing factors economic trend and growth in population receded into the background. According to calculations made by the AG Energiebilanzen, energy consumption would have decreased by 2.4 percent without the consumption-reducing impact of the mild weather.

When it comes to the development of consumption last year, one of the surprises was the sharp increase of the macroeconomic energy productivity by 5.2 percent (temperature- adjusted, plus 4.0 percent). This parameter for an efficient use of energy is calculated from the energy input per unit of economic performance. The long-term average value of this parameter amounts to approximately 2 percent.

The development of consumption, but also structural changes in the energy mix entailed that the energy-related CO₂ emissions in Germany decreased by about 34 million tons (Mt) in 2018. This equals a decline of 4.8 percent when compared to the previous year. Even when taking the temperature effect into account, the reduction is still significant with almost 4 percent and about 27 Mt respectively.

Conventional Energy Carriers on the Minus Side

In 2018, mineral oil consumption in Germany decreased by a total of 5.0 percent to 4,443 PJ (151.6 Mtce). Except for aviation fuels, all mineral oil products recorded a decline: Consumption of diesel fuel went down by 3.1 percent; gasolines exhibited a minus of 1.4 percent. With 16 percent, the decline in the sales of light fuel oil was exceptionally sharp; however, there are indications that consumers first used up their own stocks in light of the high prices, and that the actual consumption was higher than the sales in the trade sector. When it comes to aviation fuels, consumption recorded a plus of 2.3 percent.

Natural gas consumption peaked at 3,071 PJ (104.8 Mtce) in 2018 and was, thus, 1.6 percent below the previous year’s value. The primary reason for this decline was the reduced use of natural gas for heating purposes because it was about 7.5 percent warmer than in 2017 and
12.3 percent milder than the long-term average. Towards the end of the year, the cutback in the production of the chemical industry resulted in a declining demand for natural gas. In addition, less natural gas was used for power generation in 2018.

Hard coal consumption was once again characterized by a strong decline. Compared to 2017, consumption decreased by 11.2 percent to 1,301 PJ (44.4 Mtce); it thus attained the lowest level in German post-war history. The use of hard coal for the generation of electric power and heat went down by 16 percent to about 26 Mt. In 2018, almost 59 percent of the hard coal volume in Germany were used for the generation of electric power and heat. The downward trend reflects the expansion of renewables in power generation through which electricity from hard coal is increasingly being replaced and because of which a number of power plant units were decommissioned in 2018. The use of hard coal in the steel industry decreased slightly by almost 2 percent to 17.3 Mt in 2018. At the end of 2018, industrial hard coal mining was discontinued in Germany. In the future, Germany will satisfy its demand for hard coal and hard coal coke entirely through imports.

Lignite consumption peaked at 1,465 PJ (50.0 Mtce). Thus, the consumption decreased for the sixth time in a row. The decline amounted to 2.9 percent due to the decreasing use of lignite for power generation. By 2020, the use of lignite for power generation will decrease by a total of 13 percent when compared to 2015 which is due to the fact that a number of power plants will be transferred into the secure and reliable standby mode for backup purposes.

Nuclear energy exhibited a slight minus of 0.4 percent. All told, nuclear energy still contributed to the energy balance with a share of 829 PJ (28.3 Mtce) in 2018.

Renewables benefited from the installation of additional capacities – specifically when it comes to photovoltaics – as well as from the partially extreme weather conditions; they increased their contribution to the total energy consumption by 1.1 percent to 1,809 PJ (61.7 Mtce). The number of sunshine hours reached a record level so that the total use of solar energy was able to post an increase of 16.5 percent. Wind energy also experienced a record year; it increased its share in the energy balance by 5.6 percent. In contrast, the extremely low precipitation caused hydropower (without pumped storage facilities) to drop by almost one fifth. Biomass, whose share in the contribution of renewables currently amounts to 53.6 percent, recorded a minus of 2 percent which was primarily due to the milder weather. Geothermal energy remained at the previous year’s level.

Shifts in the Energy Mix

Renewables were able to expand their shares in the energy mix for 2018. Biomass, solar energy, wind energy, hydropower, geothermal energy, and the biogenic share of waste accounted for a total of 14.0 percent of the entire domestic energy consumption. The most important energy carrier continued to be mineral oil with a share of 34.3 percent, followed by natural gas with 23.7 percent. Hard coal accounted for a share of 10.0 percent and lignite for 11.3 percent. The contribution of nuclear energy amounted to 6.4 percent.

Domestic energy production exhibited a 2.8 percent decline to 3,891 PJ (132.8 Mtce) in 2018. While renewable energy sources increased their contribution to domestic energy production by almost 1 percent, all other energy carriers exhibited declines. With a minus of almost 30 percent, the decline in domestic hard coal production, which was completely discontinued by the end of the year 2018, was particularly high. Domestic natural gas production decreased by 12.6 percent and mineral oil accounted for a minus of more than 7 percent. Domestic lignite production went down by 2.9 percent. All told, energy production from domestic resources was able to cover 30 percent of the entire consumption. Today, the most important domestic energy source are renewables with a proportion of 46.3 percent (previous year: 44.6 %). They were followed by lignite with 38.4 percent (previous year: 38.5 %). The other energy carriers gained shares in the low single digit range.

Germany has to meet around 70 percent of its demand for energy through imports. Russia has become the most important supplier by far. In 2018, 36.3 percent of the German crude oil imports came from Russia; together with the other states of the former Soviet Union (CIS), the share actually amounts to almost 53 percent. When it comes to hard coal, supplies from Russia account for a share of about 40 percent. Due to the considerable increase in energy prices, the import balance for coal, natural gas, and oil went up by approximately one fifth to almost 68 billion euros in 2018 when compared to the previous year. 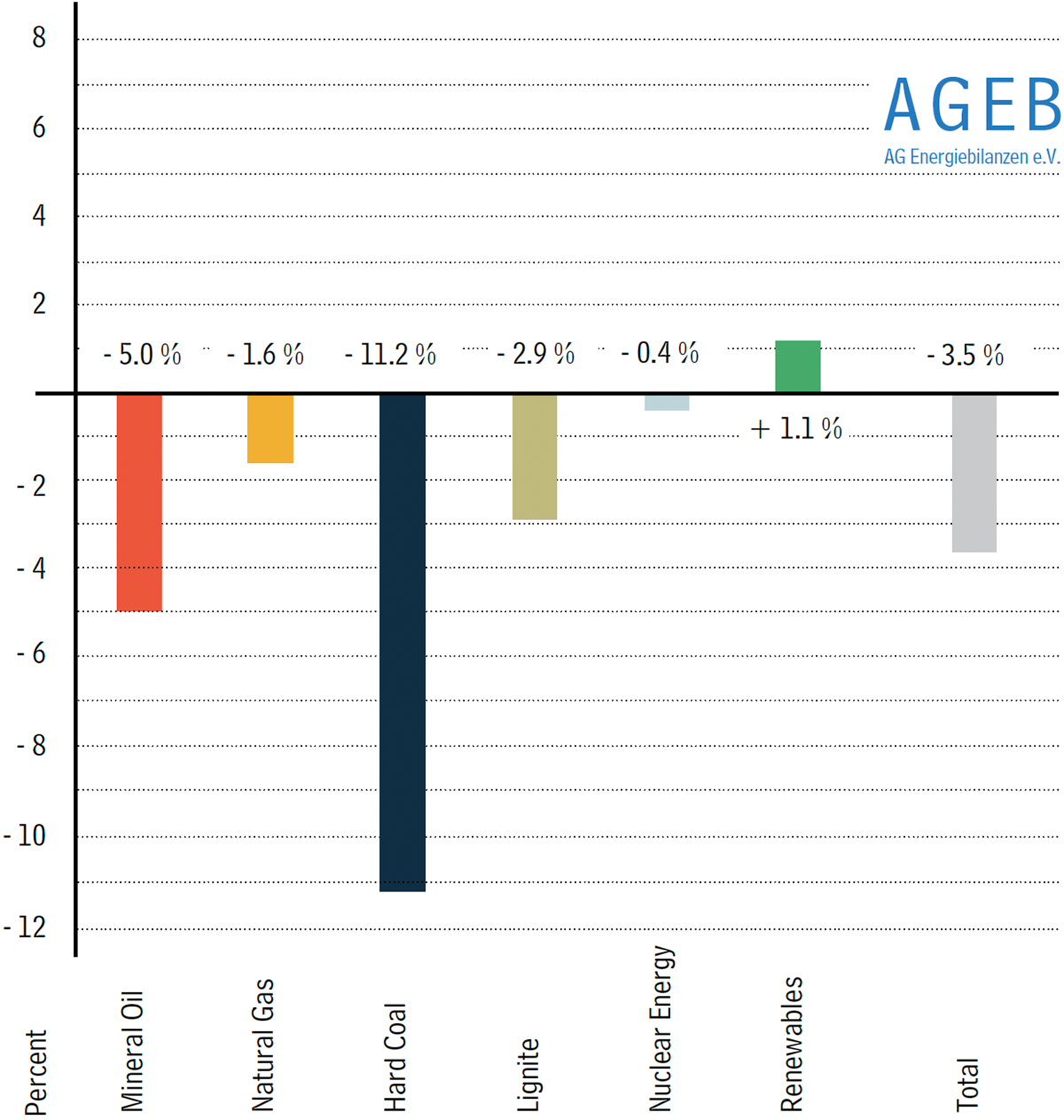 More Renewables in the Energy Mix

Structure of Primary Energy Consumption in Germany in 2018
Total Volume 12,963 PJ or 442.3 Mtce
Proportion in Percent (Same Period of the Previous Year in Parentheses) 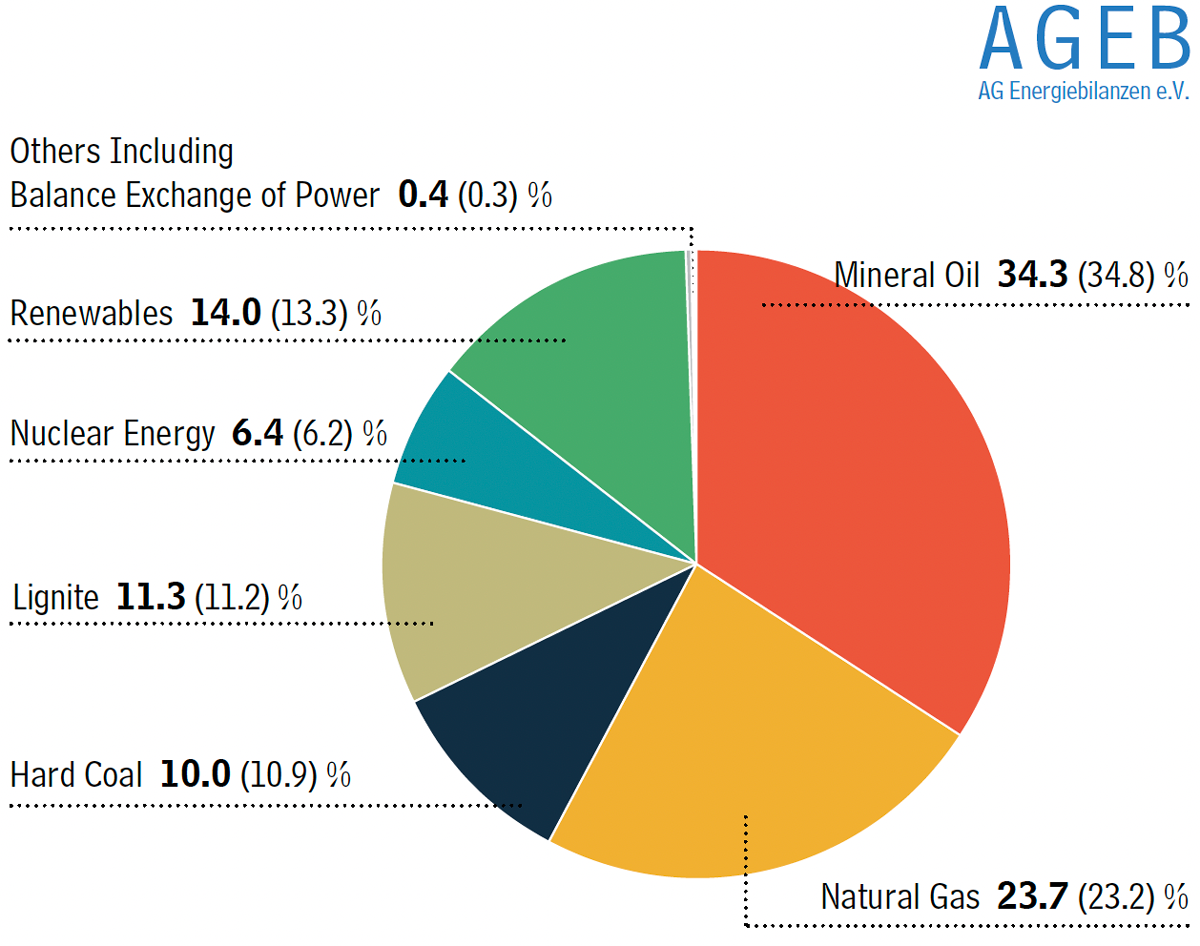 Berlin/Bergheim – The contributions of the diverse energy sources to the national energy mix have shifted further in 2018. Renewables as well as natural gas were able to increase their shares in energy consumption. Hard coal exhibited declines. Lignite and nuclear energy were able to expand their shares slightly because the decline in the total energy consumption was higher than the decline that was recorded for these two energy carriers. All told, German energy supplies are based on a broad mix of available energy carriers. 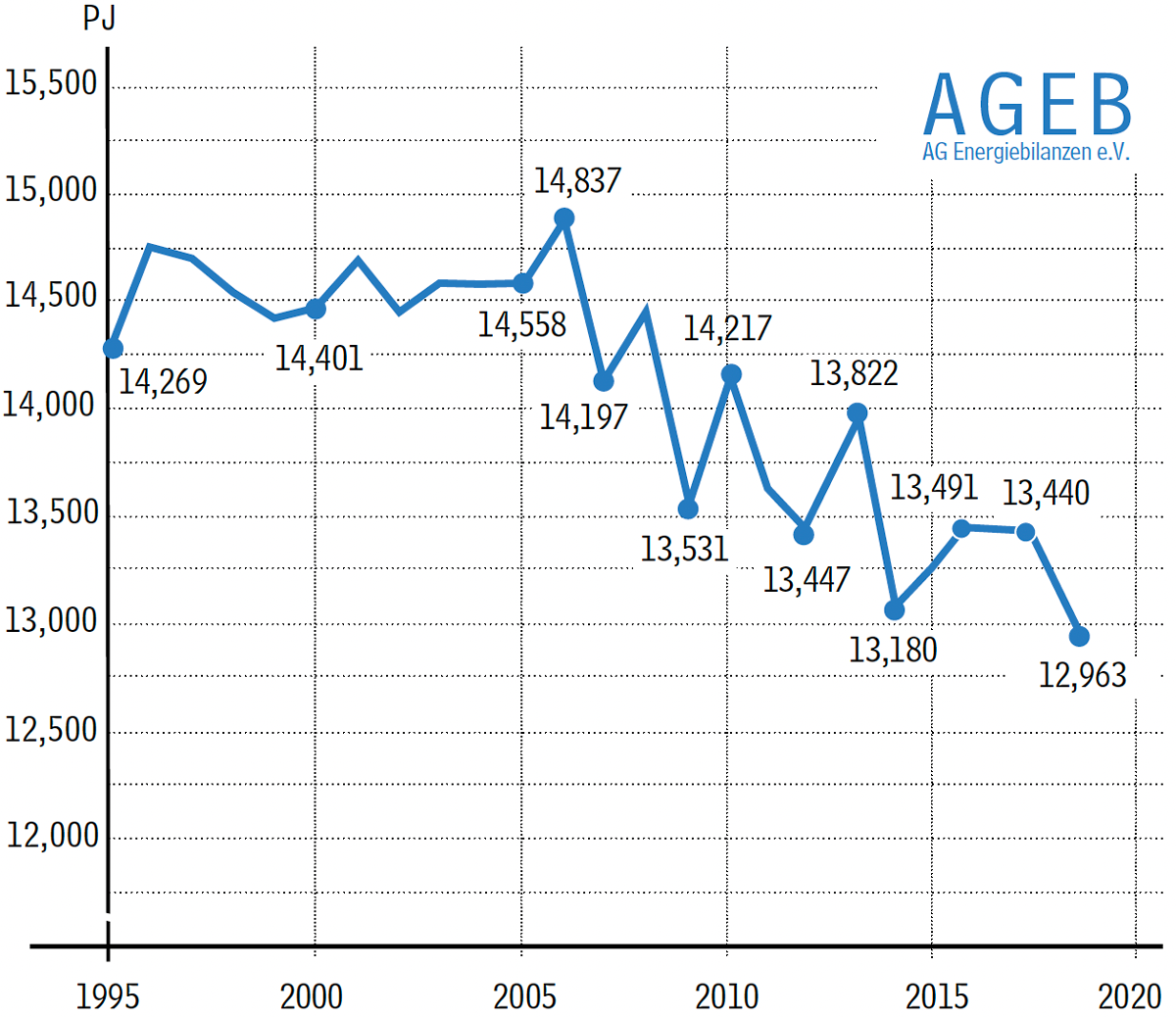 Berlin/Bergheim – In 2018, energy consumption in Germany peaked at 12,963 petajoules (PJ) which translates into 442.3 million tons of coal equivalents (Mtce). It, thus, fell 3.5 percent below the level that had been reached in 2017. The decline in consumption affected all fossil fuels. Renewables exhibited an increase of about 1 percent.